Warm and sunny with a low humidity, Sweet Berry’s freshly cut lawn was inviting.  I would like to thank Dave Mechler and Bob Hinrichs for arriving early to help with the parking. I was a bit surprised by the turnout; more than 90 by last count. 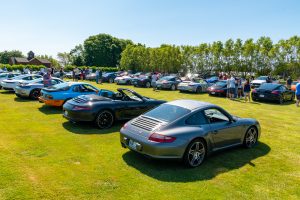 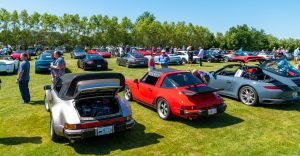 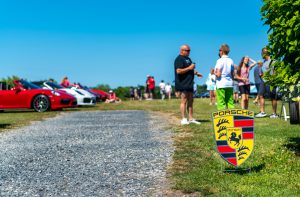 Forbes “Toby” Anderson parked his Black 1958 Porsche Super Speedster, with red leather interior.  Purchased in the Bay area from a 40-year owner; it is one of 8 Black Supers made and, unless Forbes was misquoted, it came with a hardtop.  Although running on drum brakes and 6 Volts, it has a 912 based bored engine with estimated 130 HP, running a 741 transmission. Honestly, as a previous owner of a 356C, it was eye candy for me.

Driving unto the lawn with the top down was Kymberly Foss in her stunning Meissen Blue w/Bordeaux interior 2021 992 4S with PDK.  Her husband Karl parked her other Porsche, a White earlier model 911 that just had an interior seating update in a blue tartan. Previously Kimberly owned a 2012 45 Cab with manual transmission, then a 2017 GTS 4S.  Before Porsches she drove muscle cars.  Asked what gives her pleasure driving a Porsche, she replied  “everything”.  Having interesting stories, she related being in Sweden during the 70s driving on the frozen fiords in a Porsche fitted with metal studded tires at speeds of 100 MPH.

Jesse and Brenda Mackowl entered unto the grass in their Black 2014 Cayman S.  Their first Porsche was a 1979 928, followed by a 2015 diesel Cayenne, then a 2014 Panorama GTS.  Jesse said that his dad always had Porsches (who can argue about that). Brenda has the same Porsche in white. Jesse got the Cayman because he wanted a track car.  On his first track experience his rear brakes were completely worn out.  Jesse explained that the stabilization system prioritizes using the rear brakes.

Ceileidh Siegel and daughter Dorothey in baby seat strapped in the rear jump seat parked her Meteor Grey 2007  997.1 C4S with manual transmission.  This is her first Porsche and has owned it for 6 years.  Purchased used in California she drove it back to the east coast.  Previously she drove Audi and VW GTIs, saying that she was surprised that all the cars were similar to drive.  Fastest she has driven was in a rental on the Autobahn at 175 , with her current Porsche 130, saying that once in a while she goes on the track. Ceileidh also has had articles in the Panorama  magazine.

Jon and Nicole Smith parked their very original Sand Beige 1966 912 five speed.  Jon was looking for an older Porsche being sold by original owner and was lucky to find this car in South Carolina.  Jon showed me a three-ring binder, about two inches thick, holding all the service and documentation.  The original owner was an officer in the military who seemed to drive everywhere.  The front became badly pitted and the officer had it painted; unfortunately, it was a poor paint job that delaminated.  Jon’s plan is to only preserve it, not restore it.  Jon said that the pan is solid, no rust showing. 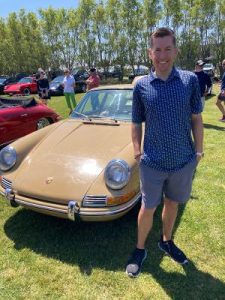 Jon’s proposal reminded me that I dated my future wife (Rosemary) in my 65 356 C in San Diego; shown is our first child, Joshua on that Porsche in Groton, CT in 1970.

The next SoBo is scheduled for 21 August (10-Noon) at Sweet Berry Farm, 915 Mitchell’s Ln, Middletown, RI. The event as always is FREE, and no pre-registration is necessary. The only requirement to park on the grass is your Porsche. A Porsche logo sign should be in place directing you to the parking area.  Sweet Berry Farm is child friendly, encouraging small children to enjoy a working farm, so when entering and exiting, drive carefully. And, as always, for any SoBo related questions, please email me at:  rr356c@aol.com

Just a reminder:  Due to a conflict with Sweet Berry in September due to their very busy apple picking month, our September SoBo will take place on September 11, off of route 24 at the LongPlex Family & Sports Center, 300 Industrial Way, Tiverton, RI 02878.  Our designated parking lot is past the entrance on the right and up a slight hill located on the left.  No fee required and food and coffee is available, as well as games and clean restrooms.