What’s your name and where do you reside?

“Chris Bassett, normally I split time between Needham and Southboro (where my family is). But since COVID, we’ve been spending most of our time on Cape Cod (3-4 days a week.)

(Are you working from home, then?)

Yup, as a financial planner for Boston-based firm. I’m currently in the process of going back to business school.”

“*Laughs* Long long ago.” Chris’ Grandfather was a car collector (mostly European). He had the first Lamborghini (400GT) which he bought in 1968.

Chris’ Nextdoor neighbor was a former Porsche racecar driver. He had every kind of [classic and modern] Porsche imaginable. For his bday every year, he would give Chris’ dad his keys to one of his 911s for the weekend. “From 3 onward, I have these incredible memories of riding in every kind of 911 with my dad. That cemented it and I knew I needed one.”

Flash forward and Chris got his first Porsche - a 2008 Cayman S with 20,000 miles, in 2016. The owner had barely driven it. Owning the car for 3 years, he put 40,000 miles on it. “I loved that car. It’s still the best handling car I’ve ever driven. On, on-ramps and tight corners, it’s planted and just unbelievable. Zero body roll and such quick responses. The only thing I didn’t like as an enthusiast was not being able to see or touch the engine.”

In 2019, Chris purchased a 2014, 911. “That was the childhood dream for me. Everything about that car… there’s nothing I would change except a bit more power... Manual too. I store it in the wintertime on a battery tender but I do drive it three seasons (favorite is Fall.) It’s been so reliable - just oil changes and battery maintenance and it starts right up in the spring.

What’s your history with PCA and New England?

Chris got his Cayman in 2016 - so 2-3 years before that. He interned for a Porsche dealership in CA while in school and joined then. He tries to attend Cars and Coffee as much as possible and is planning to get on the track this year. Hoping there will be PCA new england track events this year!!! (Stay tuned for updated Chris, we’re excited to see you there!)

Chris has an E92 3-series that he’s had since brand new - it now has 150,000 miles with X-drive and it’s been rock solid. “I sold it at one point when I moved back to Boston and was living in the North End. I just didn’t need a ‘daily’ as I had my Cayman and wasn’t driving during the week. [4 years later,] I moved to Newton, and bought the exact same car back, still in great condition. He (the buyer) didn’t need it anymore. In the family there are a couple other winter cars. Unfortunately, it’s [the 3-series] an automatic - but I’m a stick shift enthusiast for sure. If I never had to drive an automatic again I wouldn’t. All my other cars have been manual - when looking for the 911, I specifically wanted a manual.” The Cayman was also manual.

“I choose not to drive my 911 in winter - but they are very well-engineered four-season capable cars. I wouldn’t be worried on the right tires - but since I have a “winter beater,” why not take advantage of it?” 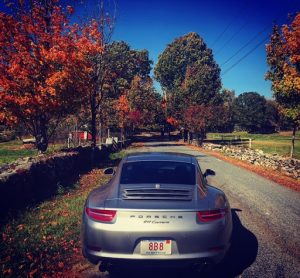 How are you keeping busy beyond cars this winter?

“Good question. Down on the Cape, we’re in a quiet community. I’ve been trying to walk and run; get as much fresh air as I can. It’s nice to have a beautiful and pretty empty place to feel a little bit more relaxed and not feel crowded.”

Chris is applying to schools and working has been taking up a lot of his time.. He has Been able to meet up with his dad to play tennis 3x a week - that’s another big passion that’s a little harder when it’s snowing.

Favorite: The scenery of New england in the snow (the day after a snowstorm) especially in Boston. “Looking across the harbor or walking down city streets to grab a pastry..”

Least favorite: “Salt on the roads! Can’t go anywhere without getting a carwash. *laughs*”

What are the best and worst cars you’ve driven in the snow?

Best: My sister has a Volvo XC90 - that thing is ‘unstoppable!’

Worst: "RWD E46 - at the time, it was on all seasons. Couldn’t go ANYWHERE in that - well, maybe sideways. Could get stuck going downhill."

"Rental car once, Chevy cobalt on bald tires - I couldn’t even get out of the lot."

Safe and Happy Driving Chris! We wish you the best of luck in your school search process and hope to see you get some hot laps on the track with us this year!