Remember my dread of forcing Miss P to drive in the rain?  Well, this morning, on the 7th day of our road trip, it happened again.  We wake up and look out the window and it is raining…again.  Linda had warned me of this the night before but I paid no heed.  This was the first of multiple mistakes I would make over the course of the next several hours.

This is not a good way to start the day.  But one fact this intrepid driver NEVER took into consideration is that when you start going UP in the mountains it starts getting colder.

After a brief (free) breakfast we gas up and hit the road.   Retracing our steps Linda and I are back on the Blue Ridge Parkway within 45 minutes, heading south, destination Blowing Rock about 100 miles away.  The goal today is to “double up” on the mileage and eventually arrive in Asheville, North Carolina in the late afternoon having traveled perhaps 190 miles.  190 miles in maybe 6 hours.  That’s something like 30 miles an hour.  How hard can it be??

I had seen signs posted at every “entrance” to the Parkway warning “Be Aware of Fog”.  Ok, sure, what’s a little fog?  Well, when you are in the mountains … often at or above 3000 feet, and it’s raining, there can be plenty of fog and/or clouds.  Plus, on a mid-April day the temperature in the mountains can rapidly approach 32 degrees.  Naturally we all know what happens at this temperature, correct?  Yep, snow!!!

None of this initially made any kind of impression on my pig-headed brain.  I had broached the idea to Linda of “doubling up the mileage” and now it was necessary to follow through.   So, we climb into the mountains and I am watching the outside temperature indicator on the Porsche instrument cluster.  Down in Mount Airy it is about 40 degrees or so.  Soon it is 38, then 36, then 34 as we continue climbing.

Just as we cross into North Carolina from Virginia I note that the outside temp is now 33 degrees.  We stop to take a photo at the North Carolina State Line and while outside (wearing my warm winter coat… thankful we had brought this along) I note the roads are beginning to get just SLIGHTY sleet covered.  There are white dots of rain on the windshield which tells me it is changing over from sleet and rain to snow.  Linda has the Porsche seat heat on full blast.  Not a good sign. 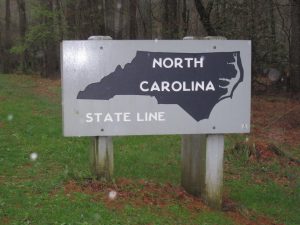 But do I stop (and think) for a moment?  Do I perhaps reconsider and alter the plan?  Perhaps climb down out of the mountains (and off my high horse) and retreat back to the lowlands?

NO… not me! I’m the man in charge!  This was my idea and by golly we are going to complete the assigned task!  Linda will tell you this is NOT one of my endearing qualities.  “Raymond, sometimes you can be a bit stubborn you know”.  “Yes, I know dear… but you married me anyway.”  We all have faults and this is one of mine.

Thus, for the remainder of the day we motor along, struggling to average that 30 MPH … struggling to sometimes see 50 yards ahead.

There are times we can hardly see the yellow line on the road.  The other day I had asked the question, “How many overlooks can you overlook?”  On a day like this the final answer is ZERO.

With the Porsche navigation MAP displayed on the center console Linda sort of guides me along as a co-pilot would on a World Rally segment.  “It looks like a hair pin turn maybe ¼ mile ahead.  After that it looks pretty straight, but I can’t tell if its going uphill or down”.  At least on a World Rally event you get to reconnoiter the route before you begin.  For the Porsche team of Boyer & Boyer, we are “flying blind” (literally) as we forge forward through the fog and sleet covered roads.

It went on like this for the remainder of the day.  There were times when we would come around a bend and things would dramatically improve.  It seemed as if one side of a mountain was in the fog & rain/sleet and the other side was not.  While not exactly sunny, the “good” side of the mountain afforded decent views across valleys cut between the rugged hills of the Blue Ridge Mountains.  Moments like this were encouraging so we would pull over and admire the somewhat muted views.  After each brief pause we would continue on,  hoping the situation would improve with each passing mile.  Sadly, we were to be constantly disappointed.

One of the “high lights” of this trip that I had been looking forward to was the Linn Cove Viaduct, perhaps the most photographed section of the road.   This engineering masterpiece was the last section of the Blue Ridge Mountain Parkway to be completed.  The concrete S curve is only 1240 feet long as it snakes around Grandfather Mountain.  It was begun in 1979 and not completed until 1987.  That’s eight years to build 1240 feet of highway.  Amazing! 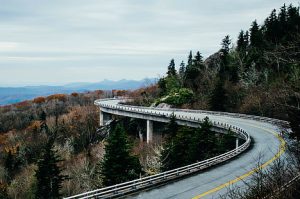 I was really looking forward to this “short” part of the trip, hopefully stopping to take a few pictures and visit the museum located at the southern end of the bridge.  Well, I knew we were ON the Viaduct as we were driving.  I could kind of view the basic road and feel the concrete expansion joints through the Porsche steering rack.  But there was nothing to see except fog and the occasional steel guard rail.  The road was completely socked in with thick white goo.

What NEVER occurred to me was to abandon this “quest” and retreat from the higher elevations.  Why not just come down from the hills and seek solace down in the valleys below?  Surly the situation would not be as “bad” down below. 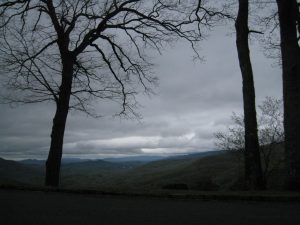 The simple answer is that such a thought did not pop up into my feeble brain.  If it had, the day most likely would have been a lot more enjoyable.   As it turned out, from a pleasure point of view, the day was pretty much a bust.  It certainly was an “experience”, but not one that either Linda or I will soon want to repeat. Sure, Miss P and I hate the rain.  But now FOG is something we both detest.