This was my second time driving at Watkins Glen, and I am in the yellow run group. My Dad and I were at the same event last year, however, this year however we were driving a 996 dedicated track car. Last year, we were driving a stock 991 with all the nannies, and I had significantly more seat time and confidence in the 991. This event at Watkins Glen was my second time driving the 996, so I was still getting used to the car setup, the shifting without rev matching and the six-point harness and Hans device, etc. – I was still building my confidence in the car. This was my goal for the weekend, build confidence in the new track car, and it took the entire weekend for this to happen. 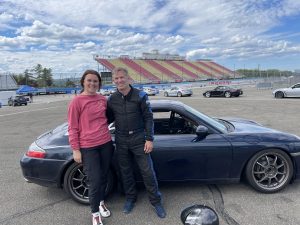 Friday’s sessions went well. I spent most of the time relearning the track and understanding where I can make improvements to gain more speed. It wasn’t until after lunch on the second day where I started to get confident, and maybe a little complacent in the car. One of the things my instructor and I we were working towards was carrying more speed through the turns. I knew that this was possible to do in the 996, but making it happen is a whole other thing. I was on my 5th lap after lunch on the second day and was getting really excited about my progress so far - this is where it all started to go wrong.

As I approached turn one, I was carrying more speed into the turn than I had been on previous laps. I could feel my back end slipping and this sent a rush of fear through my body. Typically, in the past I have been able to wait out that slipping feeling. But this time, my mind and entire body froze, and I couldn’t make any adjustments to ty and correct the oversteer. I was trying to “will” the car back on track so I wouldn’t spin out. I learned the hard way that this is not how driving works, as I am not a Jedi. The car completed the spin and I ended up sliding sideways through turn one and the car came to a stop facing the oncoming traffic. I also stalled it as I completed my first 180 spin on a track.

The spin itself was not where the anxiety crept in. I grew up driving various machines (snowmobiles and side-by-sides), so I am used to losing some control and going offline. The part that made me freak out was sitting in the stalled car and watching all the cars come through turn one. Luckily, I was stopped on a part of the track that was not online, so I didn’t have to worry too much about being hit by any of these oncoming cars. However, the feeling of sitting on a fast corner and not getting the car started while facing oncoming traffic was incredibly terrifying.

After about a minute, with some positive reinforcement from my very calm instructor (Steve Sisler), I was able to get the car running again. I did a U-turn on the track and completed the lap at a slow pace before pitting in. I stayed in the hot pits for a few minutes. This is where my instructor and I talked through what happened and what I should have done. I needed to do one of two things, and I did neither. I should have added more throttle to create more grip in the rear, and I could have counter-steered and gone off track and utilized the space that was available to me.

In the end, there was no damage done to any persons or the car. I was anxious for the rest of the day and into the next morning. Thankfully I was able to push though and slowly gain my confidence back. In the last session of the weekend, I drove my fastest lap of the event, ending the weekend on a very good note. I feel like spinning on the track was something that I needed to experience. I am now more aware of what the limit in the car feels like, and I am more aware of what I can do to better control the car as I drive near the limit. I will never forget the experience and I can use this to my advantage in upcoming events. 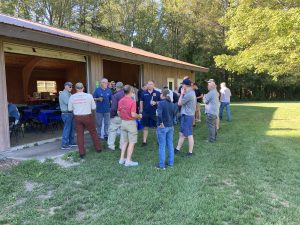 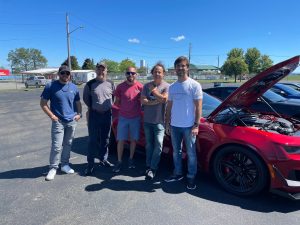