With Porsche leaving the LMP1 program behind (with the 919 EVO as a glorious reminder of that stellar campaign), you might be forgiven for trying to ignore the 86th running of the classic 24-hour motor race through some local roads in France. But you shouldn't. Porsche has 10 GT cars entered and has taken pole position in qualifying for the race this weekend! The GT classes (GT Pro and GT Amateur) present some of the most interesting and exciting racing on display right now. The fact that production cars are the raw basis for entries like the Ford GT, Ferrari 488, Corvette C7.R, Aston Martin Vantage, and, yes, the Porsche 911...that is what makes this harken back to the days of "win on Sunday, sell on Monday" that built the enthusiast auto industry.

We certainly hope Porsche can "win on Sunday"! They have 19 overall victories at Le Mans - the most of any manufacturer currently - and a huge number of class wins. The cars sound tremendous and some are wearing throw-back liveries (think Rothman's and the "truffle hunter" pink pig!) that help underscore why we're loving our Vintage Days DE events so much this year!

It's going to be very exciting to see the works cars from both the WEC and IMSA Weathertech series out there battling each other. This is one of the few events that really unites the racing world globally. Drivers from all over come to compete - even the Formula 1 drivers. 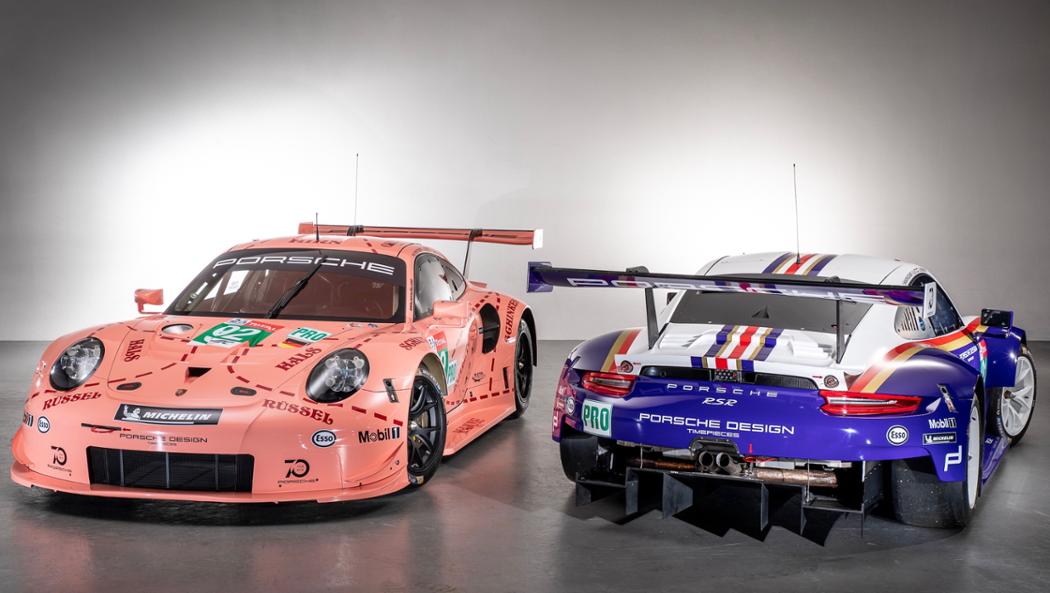 Throw-back liveries are all the rage

The Velocity channel will be broadcasting the full race (yes!!!) and will be the place to tune into all of the action. If you've not thought to watch hours of endurance racing before, I find it's great to have playing on the TV in the kitchen when I'm cooking or as background when I'm doing other things. After a while you come to recognize the intonation of the announcer's voices to recognize particularly intense on-track moments so you can turn your attention to them. Sometimes I get sucked in fully and spend a good chunk of time watching how the cars go. And listening to those glorious engines at speed.

I had the chance to go to see the race live in 2016 - and it did not disappoint. It truly is a carnival atmosphere for an entire nearly two week period. There are driver parades in town, camping areas filled with fans who drive to the track from all over Europe, and fans - tons and tons of motorsports fans. And the scale of the course - it is difficult to understand how big the course is. It spans four towns!! The first time you go is "a sighting lap" for your next visits - figuring out where to view from and what you want to see. But it's still homey. I ran into Mike Shank's family hoping on the train back to Paris and had a nice chat with them about their Tequila Patron racing program on the platform!

We hope you'll tune in and enjoy the race this weekend, around all the other great events going on, of course! And we hope you'll be cheering on Porsche even when you're not watching the race!