( author: Sterling Vernon )
Porsche has finally shown their hand, as foreshadowed by the Mission E concept, in the new Taycan. Hearing Calvin Kim, a mechanical engineer and Porsche spokesperson, describe it on a recent episode of Jay Leno's garage, you are reminded that this car does have some roots in the 918 hypercar, and we like that. But the sedan, four-door, body-style is decidedly non-918-like. It's "practical"....but in only one way - size/format. The pricing is very high, even compared to a Tesla Model S. The Taycan 4S may close that gap a bit, but it's still a six-figure automobile. The Tesla Model 3 is often heralded as the democratization of the electric car with it's comparatively modest price point. Porsche doesn't aim for that mark. But it's also not Rolls Royce. 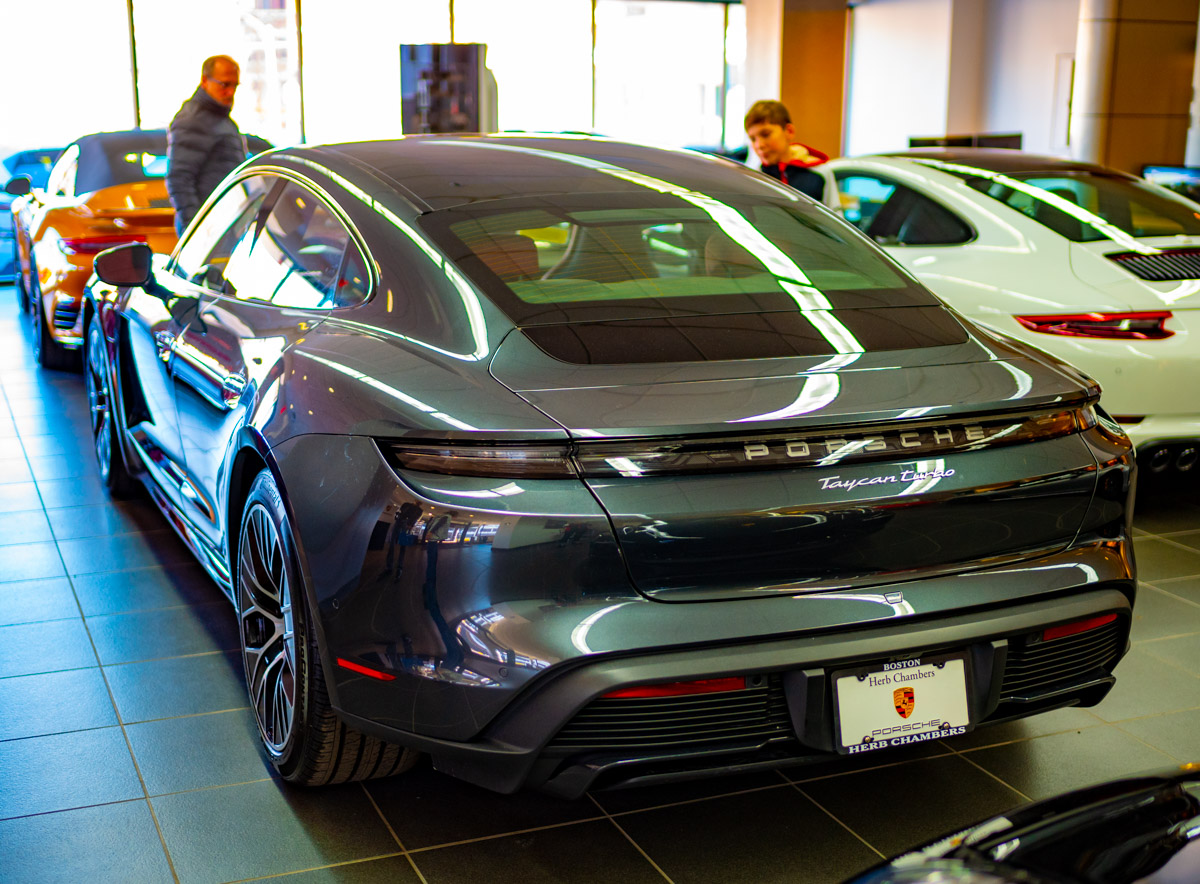 So it's not inexpensive, sure, but is it too limited dynamically to be a "true Porsche"? Porsche makes it a strong point to be the pointy, sporting end of each segment. The Macan GTS, with a new one recently unveiled, proves that point precisely. Dynamically, it's make a silk purse of the sow's ears that constitute the vast majority of cross-over, small SUV, "cute-ute" type cars. With a slam dunk vehicle like that in your lineup...why would you be bending over backwards to telegraph that the next one will be fully electric? It's all a bit baffling. I've had the pleasure of being able to drive the Taycan Turbo model recently. The power - ridiculous. Seriously. So fast. The handling? Well, I'm used to Porsche's new tendency to defy physics. I've had a slew of Cayenne vehicles - my wife forces us, literally, to always have one on hand. They are phenomenally comfortable and reasonably utilitarian. And not slow. They raise your eyebrows with their performance. But they are not Porsche race cars, obviously. They are amazing for what they are, but is that the target? Is that enough for the Taycan and all electric Porsches?

I've been scratching my head over this for a while now. Watching a new Top Gear video with Chris Harris explaining his Taycan experience, a new thought dawned on me. The Taycan is really an embodiment of technology and thinking that has to be at least three to four years behind the state-of-the-art. And that may be generous. It took Porsche quite a while to decide the concept was worth pursuing, funding and staffing it all, designing the product, prototyping, pushing and testing new technology and batteries, refitting an entire factory (!!) and supply chain, educating the workforce and sales staff, marketing the product, producing the product, and finally getting it under my right foot. None of this happened overnight. So what has happened in the industry while Porsche was working so hard to bring it's four-ish-year-old-tech to market? That's the question we must contemplate - and it's a bit fascinating.

Chris Harris remarked that he saw "a glint in the eye" of the engineer from Porsche who accompanied the Taycan he tested. That glint - that's what where we need to be focused.

What are the limitations now you might ask? Some are obvious: the aforementioned cost, the vehicle weight, the need to have a place to charge it reliably, the lack of electric infrastructure outside of residential locations in America (even LA is lacking), the time it takes to recharge... Important parts of owning a car. And then the intangibles. I'm admittedly lucky enough to consider these points to be very important. What does that extra weight do to the experience? Can electric cars have the same "soul"? Without the noise and the smell and the (actual) turbos and the gearboxes...can they still connect to us as humans? I recently heard Alex Roy on a podcast (The Smoking Tire) talking about how humans are basically hydraulic machines with a little electricity involved to control our functions - exactly like traditional cars. Think of how quickly you can fuel yourself! In five minutes, I can intake enough fuel for another eight or more hours! I hadn't thought about how traditional cars and our own human physiognomy may be somewhat fortuitously aligned! Chew on that thought a bit. Electric cars don't seem to create that same personal connection - and until Alex Roy explained his hypothesis, I struggled to articulate a defined, possible reason for it. Even Mr. Roy admits that he's been working to articulate it for years now! Electric cars feel as alien to our bodies as robots and unfeeling machines. That's an issue that needs to be solved. No amount of marketing hand-waving makes that go away.

Has the Taycan got enough "soul" now to get over these hurdles? I have to be honest and say that I don't think so. It's so much better on the intangibles than anything that has come before it that I really, really want to love it. I shock myself to say that. But then the tangible issues pop up and demand attention, cementing the mental barrier for now. It's so close...so close...but not yet close enough.

So can Porsche close that final gap? Will the clear car-making-art that we love them for finally win this battle for our hearts with an electric model? What changes need to happen?

I've long postulated that battery technology is the main obstacle. The great YouTuber behind Engineering Explained summed it up well with a master-class on energy density and how it relates to function. When batteries need to take up ~80% more space to provide ~20% of the energy density, anything that needs to move those batteries around will suffer. In a home, a battery just sits there. No problem. But an airplane illustrates this problem perfectly - using batteries is antithetical to the entire goal of moving fluidly through space (with current battery tech). I'm cooking up a theory that capacitors, with their ability to charge and discharge energy incredibly quickly, have a strong place in electric mobility design. If you could create a large array of them and control the order in which they release energy linearly...but I'm not deep enough in that world, currently, to offer any specific solution. The idea being that we need to get back to or better the energy density in both volume and mass of fossil fuels to be relevant for mobility.

Tires. Tires are the other item that I've long tried to impress upon the human populace as being of much greater importance than most people actually consider. They are the only things connecting you to the road! And yet, most folks try to buy they cheapest ones they can find and get more life from them than they were designed to provide. Often at the cost of their own safety. In the case of electric cars now, the load on the tires is huge - equivalent to at least my Cayenne if not a larger SUV. But the contact patch is often smaller - for "efficient" rolling resistance. If you watch the linked Chris Harris video above, he explains that his standard (admittedly somewhat egregious) hooning resulted in the tires being completely unusable within three short bursts. A 911 probably would have lasted at least the day. Extrapolate that to reasonable "spirited" driving....and I see a potential issue here that will need to be watched carefully as these cars age.

And don't get me started on "autopilot" and self-driving. Most reports I see now indicate that full self-driving may actually be impossible. It's just too complicated. I've been saying this for quite a while now. I'm not sure how many more Teslerati organ-donors we need to go through before we accept this and look for better ways to move people through space without them having to pay attention.

But I'm curious what Porsche engineers have up their sleeves, even now, waiting to work their magical powers of wowing us into opening our minds and wallets to their next innovations. If any company is going to doggedly pursue a viable answer of how to make an electric vehicle stir the soul, I'd have to put my money on Porsche.

It's too bad we're not there yet with Electric Porsche #1 (the Taycan model)...but we're not still all driving Gmünd's either, are we?