Asheville, North Carolina was always going to be the terminus of our multi-day road trip in Miss P.  For over a decade or more Linda and I had been talking about going to Asheville, specifically to visit the world-famous Biltmore Estate.  When we began planning this adventure, we both knew that this “museum” would be the highlight of the journey.

Our overall plan is to spend 3 days in and around Asheville, with the last day being the BIG DAY and our tour of the Biltmore. Our thought process was that by waiting until our last day in the city, if something went haywire during our travels and we were delayed while on the road, we could eliminate some plans and still be able to sample the house and the surrounding grounds.

Linda began researching purchasing tickets to the Estate back in February and even then, we could not just “pick a time” on say Thursday, April 18.  We really wanted to reserve a slot around 10am or so.  But even 2 months in advance the best time we could get was about 3:45pm on our chosen day.  We were rather disappointed with this time because we knew the building “closed” at 5:30pm.  Thus, we felt we would be rather rushed trying to squeeze in everything we wanted to see.  Yet beggars can’t be choosers so Linda took what she could get.

We arrived in Asheville late on Monday the 16th and spent the next 2 days exploring the city and surrounding areas.  Basically, we were just “marking time” until Thursday.  In retrospect my idea of “doubling up” the travel distance on the Blue Ridge was ill advised.  We should have invested an extra day driving in the mountains (hopefully not in the rain and fog).  Live and learn, I guess.

Walking through the wooded parking areas, you come around a bend and there it is… this huge imposing structure that can only be described as SPECTACULAR!  (Reminds me of that Seinfeld episode … “Yes Jerry, they are real and they are SPECTACULAR!!) 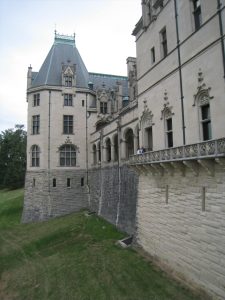 This 250 room French Renaissance chateau is said to be the largest private home in the United States.  It was built between 1890 and 1895 for George Vanderbilt.  The contractors had to “rush” during the last year of construction to finish the work as Mr. Vanderbilt insisted on celebrating Christmas of 1895 in his new abode.  Talk about time pressure. 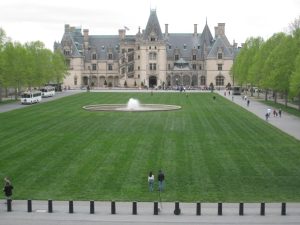 With our 3:45 tour more than 5 hours away Linda and I began to explore the surrounding gardens and grounds.  Now I must admit that personally I am not much of a garden person.  Thus, walking around multiple flower beds for what could potentially be several hours holds no allure for me.

The overall estate contains more than 125,000 acres.  Looking at the printed guide we were given I could see that another section of the estate was called Antler Hill Village & Winery.  “Hey Linda, lets go over to this Antler Hill thing.  It’s only 11:45, we should have plenty of time to get there and be back by 3:45.  That’s 4 hours from now, how long can it take to get to Antler Hill?  Let’s go.”

We scoot back to Miss P and head out.  Most of the roads are one way and traffic is surprisingly light.  We drive and drive and drive. And then drive some more.  It takes almost 15 minutes to get to our next destination.  All this time I am thinking “we are still INSIDE the boundaries of this estate.  Vanderbilt owned all this land.  Talk about being rich!”  It turns out the Village is 5 miles from the main house.

We find two important things at Antler Hill.  First is a small snack bar with short lines and great ice cream.  Second is a neat museum with an exhibit entitled “The Vanderbilts… At Home & Abroad”.  The theme here explores all the globe-trotting that George and Edith experienced during their lifetime.  They trekked around the world together and collected items from almost every continent on the globe.

Linda and I invested more than 2 hours in this well thought out museum.  While not overly large (just 5 rooms and a small theatre) it was filled with so many interesting old photos and objects. There was so much to see and so many placards to read that we could have spent the remainder of the day here.   Yet time marches on.  Since I could not determine how long it would take to return to the “big house” we pulled ourselves away at 3pm and headed back.

The actual Biltmore Estate structure is certainly an imposing building.

On the main floor some rooms had ceilings that must have been at least 20 to 25 feet high, while others featured a more modest height.  One interesting fact that was mentioned during our tour was that during World War II the National Gallery of Art sent many priceless art objects to Asheville to be stored in the Music Room at the Biltmore Estate.  Famous works by Botticelli, Donatello, Rembrandt and others   were kept here under 24-hour guard until all were returned to Washington at the end of the war.

On the second floor of the house were 15 separate bedrooms, each with its own theme.  The Vanderbilts often invited guest to stay for many days and sometimes weeks.  Each guest had their own room (naturally) and servants to wait on them.  Back in the day it’s amazing how the very rich lived.  It’s probably the same today, but I could not even venture a guess.

Linda was very impressed with the fact that almost all of the furniture is original to the house.  Since the Vanderbilt family has always owned the property (unlike many other large homes … think of Newport, Rhode Island … where many properties have been sold to outside interests) most of the furniture has remained as it was when the Biltmore was first constructed.  So, as we toured the building what we were seeing was furniture that was there during the early years of 1895 to 1930 or so.  Pretty impressive indeed.

Another intriguing aspect, for me at least, was the very last part of the tour.  The basement section of the house gives one an up-close sense of the construction techniques of this impressive structure.  It took almost 2 years just to complete all the foundations, with some footings extend down almost 29 feet.  I love examining how a building is put together and this part of the tour did not disappoint.

One final area that struck home was a large display area with photographs depicting the various “stages” of the house under construction.  The amount of manpower and material that was required to build this edifice is just mind blowing.  Hundreds of skilled workers were required every day.  Carpenters, stone masons, plasterers, painters, plus laborers of all kind were needed.  One photo showed a steam engine pulling about 10 rail cars filled with workers being transported to the job site from Asheville.  I would estimate that there were 40 men in each car.  That’s 400 laborers.  My guess is that these men were just one portion of the total workforce employed on a daily basis for almost 5 years.  It sure is nice to have a healthy budget when you are building a house of this magnitude.

All too soon our time was running out.  As much as we wanted to linger and ask more questions (the docent staff was very knowledgeable and willing to answer any question) the clocks were chiming 5:30 as we exited back into the sunshine.  The house was closed but we could wonder the grounds until 7pm.  This we did, hoping in some way to prolong a day which had been a long-held vision of ours for oh so many years. 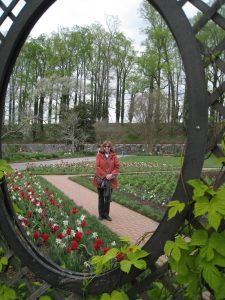 For Linda and I our long-held dream was more than matched by the reality of the beautiful, impressive Biltmore Estate in Asheville, North Carolina.