October was a nice month of car events starting with the NER Concours at the Elms in Newport. David Melchar, Chair for the last two Concours, apparently has sold his soul to the Devil in return for unbelievable weather. He also has successfully recruited a great team of volunteers, and the 2021 event was equally as well run as the one at Chateau-sur-Mer in 2019. This year I was a volunteer judge, and they wisely assigned me to score the cleanliness of the rear storage areas of Macans and Cayennes (no, I’m not making that up). They were all really clean. I was so good at my job that Larry Levin, who takes most of the photos that you find on our website, won a trophy with his white Macan (but not first place – don’t blame me, Larry, I gave you a perfect score!). 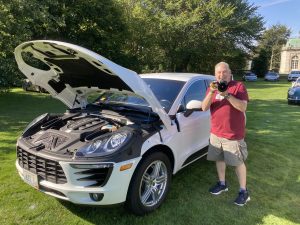 I rode down to Newport with our Treasurer, Kristin Larson, and after the awards ceremony, we walked down to the Tennis Hall of Fame, where the Audrain parade cars were parked. What a show! Click here to watch a few minutes of the cars as they drove off — all in all, a great way to spend a fall day. 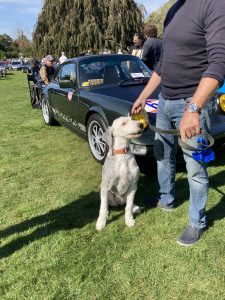 The following Friday, I was at Palmer to instruct at one of their “Arrive and Drives” (they have a fleet of caged Miatas, and you pay $500 for four instructed sessions).  Another day of perfect weather, and I had one of the best students ever.  She had only been on a track once, seventeen years ago, but by the end of the day, she was hitting all the apexes and driving most of the corners close to the limit. It’s a nice program – the Miatas aren’t pretty but work well and are fun to drive. To add to the day, both of the previous Jamaican Bakin’ vehicles were there:  Miata and E30. Mike has made some serious upgrades to the Miata and was kind enough to let me take it out. I’d like to say it was an old home week, but the truth is the old home has been heavily renovated (better engine, new suspension) and drove way better than I remembered. Really nice that the cars are in good hands and being enjoyed.

The third October event was the annual Charlie and Martha Dow Rally (switched from a tour because rallies are easier to run and perhaps more fun anyway). There is a full report elsewhere, but I’ll throw in a few comments.  1)  We got lucky with the weather – rain was predicted, but it turned out gorgeous.  2)  People really seemed to enjoy it, and there were quite a few “newbies.”  3) Anker and Lisa did a great job with the route and the logistics.  4)  Charlie and Martha’s family was very well represented and appreciative of keeping Charlie’s memory alive.  (Eric commented that Martha had objected to the previous title of “Charlie and Martha Dow Memorial Tour” since she is very much alive and is now pleased that it is the “Annual” rally.) 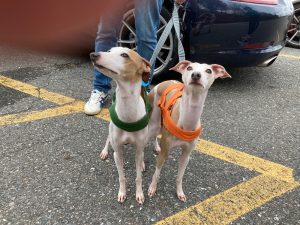 In other news, there are two new (to me) vehicles in the extended fleet. I finally gave up on the Pilot and upgraded to a used Audi Q7, which will hopefully tow much better. The primary user of this vehicle was not happy to discover that it actually has quite a bit less room inside than the Pilot (not to mention her preferred Odyssey) and fewer places to store stuff and transport groceries. She does admit that it drives better. I was foolishly optimistic that Turbo (dog), who pants and shakes during car rides, might be calmer in a quieter vehicle but no such luck.

The other addition is the latest Jamaican Bakin’ race car:  a BMW E36 that will replace the Mustang (still for sale - don’t forget to use code PCANER for your 5% discount). While we are taking a step back in terms of speed, this will be in compliance with AER rules and also be eligible for Champ car events. Dave, Dennis, and Chip retrieved it from Maryland down and back in the same day – road warriors!  Some assembly required – a few tweaks but mostly getting a good seat that works for all of us. We hope to get a few laps in at a Thompson Club day before the snow flies. Speaking of which, make sure you get out and enjoy these last few weeks before the cars go to bed for the winter.