Because the apple picking resulted in a packed lawn last month, I was at Sweet Berry shortly after 9 AM Sunday to ensure that the parking of Porsches would be as orderly as possible.  By 9:30 AM more than 6 Porsches arrived. By late morning parked Porsches exceeded 60.

I have to say that these monthly meets are one of my more pleasurable experiences; the sharing of stories exudes enthusiasm of Porsche ownership.  There is a consistency in design from my first Porsche (65 356C) to my current 996 C4.  The view in both cars is similarly shown to the driver, like the gauges seen through the steering wheel.  And, I have always been impressed with the stiffness of the body design, and the absence of rattles, even as the car ages.

Elizabeth Kahane exuberantly parked her 2021 25th anniversary Porsche Boxster; it is #364 out of 1250. On the passenger side of the dash is the engraved number beneath the Boxster 25. Silver, with a red interior, this Porsche is a keeper.  With a stick shift Elizabeth says the car is sexy, fast, and fun to drive.  Previously she owned a 2017 Boxster. 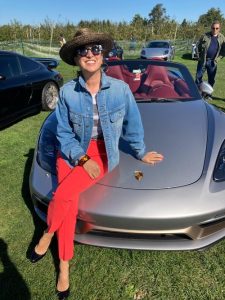 Ariel, and son Apollo arrived in a unique and attractive 2018 911 Targa 4GTS.  A graphite Blue metallic with a matte paint protection film reflected an attractive glow.  This is Ariel’s first Porsche, bought new, now showing 31K.  Ariel says that he “always liked Targas and the best part is feeling it, even just around town”. 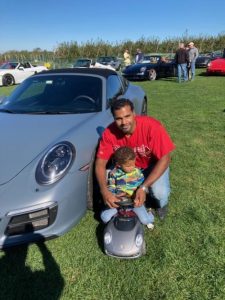 Matt Meeks parked his basalt black, with sand beige interior 2006 911 C4S.  This is Matts first Porsche; he is the third owner, purchased this past February, now showing just 47k miles.  I like the option of the white gauges and Matt likes some of the older attributes making the car a bit analog. 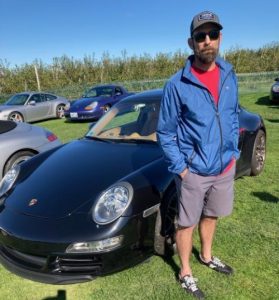 In closing. I have to mention that this coffee had more dogs as Porsche passengers than any previous time; I think there were five different Porsches with dogs, two as passengers in one of the selected photos.

This was our last SoBo of the season. As you may know, the first SoBo of the season starts before Sweet Berry Farm officially opens. So, if anyone has any ideas for an early alternative location anywhere south of Boston, please forward your suggestion.