It’s 1970,  I’ve just graduated and started my new job at a Boston Consultant Engineering Firm.   I have an apartment off Comm Ave in Brighton,  so every day I’m commuting into the office on Stuart Street on the green line.    It’s a nice late summer day and I get off the Trolly a little early to stop at the Star Market for groceries and walk up Comm ave.   There’s a small single bay shop along the way that usually has a car in the window.   This time, as I go by,  there is an interesting looking  red sports car filling the window.   It looks somewhat familiar and by now I’m more than a little curious.    I think I know what it is but it’s hard to be sure through the somewhat dingy window.    But unfortunately,  the shop is closed for the day.

A few Saturdays later,  I walk by the shop again and this time it’s open.  I walk in and talk to the guy who is there and discover that the car is for sale.    Fantastic --  tell me more.   It’s a well used street version of a mid-engined race car.  6 years old and it has 30 something thousand miles on it and it needs an expensive full engine out service.    But they will sell it as–is for the, at the time,  rather staggering sum of $ 10,000.  Which as I recall,  was more than a year’s salary at my new job.   OK,  he probably just threw out a ridiculous price so I’d go away.   In 1970,  a 6 year old  well used Ferrari was still just another near the end of it’s practical life Italian money pit, it had been sitting for months waiting for parts that may or may not ever arrive.   But he was serious.   It was, after all,  as you may have guessed by now, a 6 year old well used Ferrari showing some wear and tear.   It was not perfect,  it had a few bumps and scrapes,  and , of course, it still needed that service.   The Market for old Ferrari’s was just not that good. 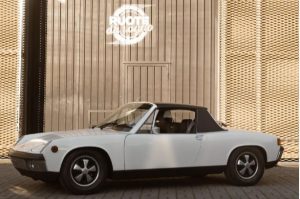