In my new (and evolving) role as DE Crier I received an email from Adam asking me to pen something that would get people excited for the upcoming DE season.  OK, fair enough.  There are a few ways we can go with this.  “Cooped up all winter, pandemic blues, blah, blah, blah but now the robin chirps, the tires squeal, etc.” would be one way. Or “Porsches are meant to be driven on the track, finally see what your car can do.”  But I’m going to take a more concrete approach and take you through the season, track by track, so you’ll have a sense of what is on tap.  Warning!  (Go ahead and wince, Adam.) This will be one man’s opinion and not every word will be positive. But before we get into that don’t forget about the DE Ground School at Palmer on April 24th. This is a class room introduction to DE pitched to those who have never done one (and includes the ability to do slow laps on the track). Even if you don’t think you want to do a DE why not go (and maybe have your mind changed)? Palmer is a cool place, see your other Porsche buddies, go for a nice ride in a rural part of the state.

All right, back to the task at hand.

The first event is NCR’s two day at Lime Rock. Paul Newman loved Lime Rock and I am a big fan – of Paul, but not Lime Rock. It’s a rare combination in that it is great for beginners and also very technical for the experienced.  But it’s short and there is only one left turn where I have managed to spin twice (which probably signals that I am a beginner so why don’t I like it more?). Also the downhill should be taken flat on the floor in my car but that hasn’t seemed to happen yet – so maybe I’m just a whiner. It is historic, in a very pretty part of CT, has good facilities and is a bucket list track. Stay in Great Barrington which is a cool town with nice restaurants.

Next up is Thompson which is also historic – the oval dates to 1940 and was one of the first paved tracks in the country.  The road course has gone through a number of versions.  Like Lime Rock it is pretty short at 1.6 miles but is much slower (60 seconds is a good lap at LRP, 80 seconds at Thompson) and has more turns. The haters call it a glorified autocross (hey! I was the AX chair for 6 or 7 seasons buster) but it has some nice subtleties and the facilities are excellent. Newer Porsches will see 130 on the straight, quit complaining. And, if you live in metro Boston, it is really close.

After that is the first of the two Palmer events (second one is in September). We run one event clockwise and the other counter clockwise (Anker says “anti-clockwise”). I prefer CCW but that’s just because I’ve done a million laps in that direction. This is a challenging track with elevation changes, off-camber turns and lots of opportunity to go wrong. But don’t because it is also the least forgiving of an “off.”  Facilities are good and getting better.  NER has a great relationship with Palmer and there will be good socials when the track goes cold.  An easy drive from Boston but no close hotels. At the Ware Diner they give you a choice of how you want your bacon cooked.

Back on our schedule after a multi-year break is Mont-Tremblant (use your French and call it LCMT).  This is another historic circuit that you have to get to at least once (it was called St. Jovite when F1 ran here). It is a very nice course with some interesting turns and a loooong straight, good runoff as well. I assume our event will be timed to coincide with the Blues Festival at the ski village which is fun. The geography is a little confusing:  at the north is Mont-Tremblant resort (the ski village), in the middle is the village of Mont-Tremblant (where the track is) and in the south is what was the village of St. Jovite – but now all are called Mont-Tremblant. I’m not fond of the ski village (too Disney-esque, drinks from an automated machine, but the kids will like it and the hotels are more modern) – better restaurants in St. Jovite. Consider camping at the track – a nice lake to swim in.  Pain in the neck to get to with the border crossing and maybe horrible traffic in Montreal (Adam thinks the bridge construction may be completed but I’d still brush up on my French swear vocabulary). 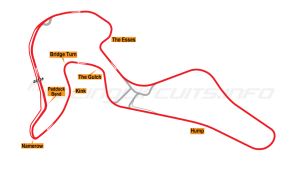 Also back on our schedule is Calabogie which is scheduled so that you do Mont-Tremblant then have a travel day to Calabogie – enjoy your week in Canada! Calabogie, like a martini, is an acquired taste (I really like martinis!). It is long and has many corners that look the same but (obviously) aren’t – after three days I was still struggling. And there is nothing to do nearby. But the hard core folks love it and there will be special programming to help advanced drivers improve (heavy training on interpreting data). I’ll be looking for a volunteer to help me write that one up from afar.

In July is the first of two NCR events at Tamworth.  Great track, gorgeous views – it’s too easy to screw up because you are admiring Mt. Chocorua off in the distance when you need to be hitting an apex. The facilities are not yet first class – no garages and not enough paved parking – but the quality of the track more than makes up for it.  The nearby hotels are weak – better ones a half hour away in North Conway - but have breakfast at Rosie’s and you’ll start your day off right. 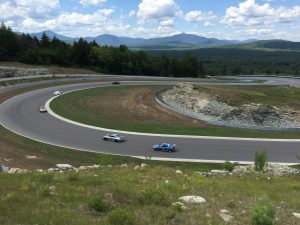 Ah, Watkins Glen. What can I say?  The best, just go.  And take the husband – he’ll like the wineries, the Glen, the Corning Glass Museum.

The season ends with NCR’s New Hampshire Motor Speedway event in October (yes, it might be a little nippy). Before we had Palmer and Thompson we did tons of events at NHMS and everyone complained, instructors wouldn’t sign up. Yes, there are a couple of bumps that are hard on full-on track cars and, yes, it is pretty short.  But it’s a fun track, very safe for newbies and it is a hoot being in this huge sports complex where the NASCAR boys go to play (climb up in the stands between run sessions for a sense of it). Along with Thompson, Palmer and WGI it has garages. And there are lots of good lodging and eating choices nearby (have at least one meal at the Makris).

So there you have it:  29 days at 8 different tracks spread out over the season. If you have never done a track day then you need to, damn it!  And if you are a regular then welcome the newcomers into your fun club. One final enticement:  there are socials when the track goes cold and (thanks to the successful ministrations of Pam Mascetta and Judi Mansing) even the most snobby beer geeks will find something to their liking. See you there!