PCA Parades have been held every year since 1956, the year after the club began. It is a gathering of Porsche owners held to use, compare and talk about their cars.  That would include a Concours, an autocross, tech sessions and a rally. Like the Club itself (now 150k members) that has been expanded over the years  to include driving tours, Golf tournaments, 5k Runs, RC car Races, Sim racing, an art show and activities for kids. There are now two types of rallys,  TSD (time speed distance) and a gimmick rally. What used to be a long weekend has expanded into a week long event.  At least a week is needed just to catch up with all the Porsche friends that haven’t been seen for a year from all over the US.

This year’s gathering in the Poconos drew over 1200 cars and was the largest ever. Many local members attended and four of us met on the Mass Pike and went down as a group. Brother, Bill, drove up from MD to put the Speedsters together again. 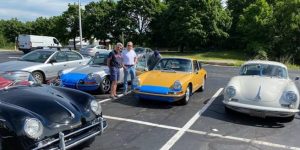 Because of the size of the gathering it is tough to find a location that can accommodate that many people since lots of dinners and banquets are always planned. The Kalahari Resort Convention Center includes a waterpark and did a great job taking care of everyone.

The first event that we participated in was the Concours that was held  in the parking lot of the resort as rain the week before had made the beautiful surrounding fields too soft to drive on. Many of the judged cars were left inside in the prep room on a first come first serve basis. It only had room for half the field of over 130 entrants. We intended to put our Tubs in the street class since they were driven over 250 miles  to get there (no enclosed trailers for us) but we wound up in a Full class that had the judges climbing all over them. 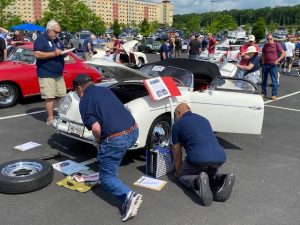 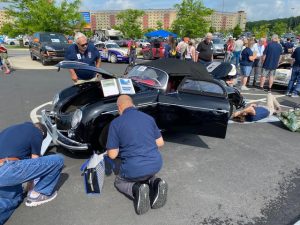 Bills car came out ahead of Blackie but both of us were at the bottom of the page in the 356 class. We faired better the next day at the Autocross held at Pocono Raceway, where I took First place and Bill was second 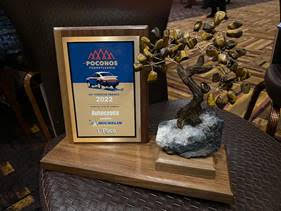 The next event for us was the TSD Rally which was done using a phone app (of course) that didn’t require any checkpoints along the route. There were 20 virtual checkpoints and they gave us immediate results when we passed by them on the route. Some of the instructions were pretty far apart and in a couple of cases just when we were wondering if we were still on course the phone would ding and tell us that we had just passed a checkpoint. It was amazing. We did get off course a couple of times but the system allowed us to add (or reduce) the time without a penalty and that saved us. Points are added for each second early or late at a checkpoint and we did get some 1’s and 3’s which inspired us to really pay attention to instructions. The odometer in Blackie isn’t exactly high tech but is was a perfect day for a drive over some great roads in the Ponoco mountains. Neither of us have done a Rally in years but this format will certainly make those events more attractive. I could do a rally with grandkids.

With the exception of the Concours, it was a pretty thin field of 356s at Parade. Lots of SUV’s and late model 911’s. As the week went along we realized we were the only two Tubs still there as the show cars had all gone home in their sealed trailers. Whenever we parked it seemed that a lot of other owners were taking our picture. Many of the younger members weren’t born when our Tubs were built but they certainly had their iphone 13’s handy.

We took a brewery tour at the oldest beer producer in the US, Yuengling, in business since 1829. The beer was great (free samples to old guys). They have been in the same building since 1831 and a lot of the brewing equipment looked to be original, including the break room that would make a great bar today. 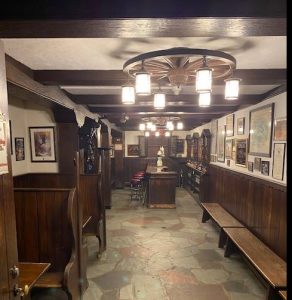 It wouldn’t be Parade without a Tech Quiz and Bill and I had both signed up for the 356 test. The main body (60 out of 100 questions) of the test was made up of general questions about Porsche (What’s the displacement of a 2020 Boxster Spyder? – 4.0 liter) and things like their racing history over the years (How many times did Derek Bell win LeMans in a Porsche? – 4 times). The smaller section covered questions about the model selected. Choices were 356, 911, 914, 944, Macan, etc. There were some really tricky questions ( When were disc brakes first used on a 356 ?– 1962 Carrera2) and Bill did it best with a second place and I was behind him in 4th.

The last drive was on Saturday afternoon called the  Parade of Porsches that drove the 11 miles to Ponoco Raceway with a police escort. 300 Porsches were lined up and stopped traffic in a number of small towns along the way. We got a lap in on the 2.5 mile track looking down onto the infield where the autocross had been held. By the time we headed back to the Kalahari Resort folks along the route were in their front yards with their phones in hand. Great fun.

Our day wasn’t over when we got back because one of the lots had been emptied so that we cound spell out the 70th anniversary logo with Porsches. Vu Nguyen, Executive Director of PCA, who covers everything Porsche and was everywhere at Parade, had one last trick set up for us before the final dinner. He had called for red cars before the drive to make up the center of the logo as the rest of us were the border. It came out great. 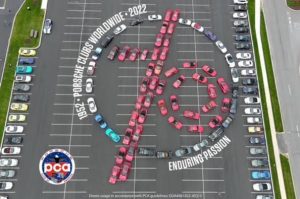 A sponsor new to PCA, was Princess Cruises who gave away a 7 day cruise. The winner could pick from any of the destinations on their list and they seem to be everywhere there’s water. Door prize drawings were done at every dinner with all sorts of great gifts including sets of tires (Michelin), Coco Mats and Porsche hats. The best part was when a members son, about 13 years old, was pressed into service by the MC to draw all the tickets for the prizes at the Autocross Awards Dinner. Boredom was written across his face drawing tickets to give away hats and window cleaner until he drew his fathers name for the set of tires. His feet never reached the stage for 10 minutes.

Additional vendor support included wine glasses (Leland West), car wash area supplies (Griot’s Garage), and Volunteer shirts (Pelican Parts). Goodie bags were filled with all sorts of car stuff that we find useful. Even free stickers suitable for grandkids were everywhere. I even snagged a nice desk clock from Porsche with the Martini logo and another NER member won a Porsche watch. 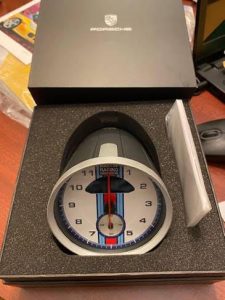 The Victory Awards Banquet on the last night had a great program from long time supporter, Reliable  Carriers, Inc who raffled off a free ride to next years Parade in Palm Springs, CA in one of their covered carriers. That is too far for Blackie to drive so we’re shooting for the 2024 Parade in Birmingham, AL (think Barber Motorsport Park). East coast owners should put that on their to do list now.

Any time a PCA Parade gets to this side of the Mississippi river and you can drive there, do it. You’ll have a great week.