OK, sharpeyes, you are right – it was a Tour at first but it is a rally now and, once again, it was a great time.  We started at Sweet Berry Farm in Middletown RI, sharing the parking lot with the usual Sunday SoBo event.  A total of 41 rallyers were dispatched at 90 second intervals to follow a lovely course that wound back and forth between Rhode Island and Massachusetts, finally ending at Rachel’s Lakeside in Dartmouth MA. Along the route participants were required to spot the answers to 22 questions (some were “trick questions”) based on sights that they encountered.  Teams turned in their answer sheet with the total mileage driven (as per their car’s odometer) acting as the tie breaker. 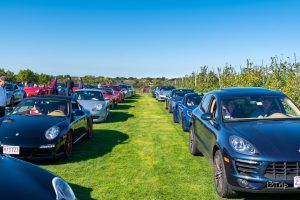 This year’s rallyers were darned observant and four cars answered 20 of the 22 questions correctly (or at least correctly as per the judges – there was some controversy):  Tom Tate/Jeff Leeds, the Haynes, the Walkers and the Laws.  And the first three of these had the correct distance.  Clearly the organizers had not anticipated this as there was no “second tiebreaker” and the winner was chosen by drawing names from a hat by Spiderman (young Mr. Beaver).  Based on this Tom (darn it) and Jeff were declared the winner and took home a $250 gift certificate donated by Craft Detailing. 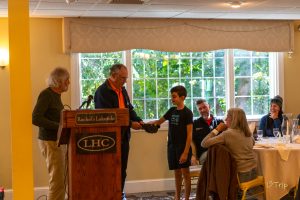 There was a second contest as well. Participants were asked to tell their best car joke to the judges (well, OK, one judge – me) as they awaited departure. It was very evident that the internet had been heavily interrogated in the search of jokes so there was considerable duplication. The most original was, unfortunately, a little too risque to be a winner. The winner was the previously mentioned Law team with runner up trophies to the Hebners and the Mattsons. (Here’s the internet version of the joke:  Three men were waiting in line to enter Heaven. The angel at the gate asks the first man "how many times did you cheat on your wife?" "10 times" the man answers. The angel gives him the keys to a 2010 Toyota Camry "this is what you will drive around heaven". The second man says he cheated on his wife 5 times, the angel gives him a 2018 Lexus and lets him in. The third man says he never cheated on his wife, he gets a 2022 Porsche GT3RS. A few days later the 3 men meet and the man in the Porsche is very sad, the men ask him what's wrong, he replies "I just saw my wife riding around on a scooter.”)

And, after the fact, we’ll declare a third contest.  The winner of the best “Fun Team Name” is the Kricks for “RhodeShow.”

Thanks to our sponsors Craft Detailing and Griot’s Garage, our host Sweet Berry Farm and our hard working team of Roger Slocum, Paul Soares, Anker Berg-Sonne, Lisa Burke, Larry Levin and Rosemary Driscoll.  And special thanks to the Dow family for their lifetime commitment to PCA and for sending 6 representatives (and bringing Charlie’s yellow 911) to this year’s event!