It is amazing how ones perspective changes when everything slows down. With high powered cars in the garage it is easy to get caught up in horsepower figures and 0-60 times. Jeff Leeds and I ran the last PCA Rally in the Turbo S and half the job was keeping the speed down so that we could find the answers to the questions along the route. It was done with a lot of second gear and we tied with two other teams for the most right answers and won the drawing for first place and a free detail from Craft Detailing in Dedham. While the 356’s are slow, they can easily keep up with modern traffic and provide a different driving experience than a modern Porsche. You don’t spend any time looking at other cars that may want to “play” and slower speeds give you more time to enjoy the scenery especially in the Fall in New England.

If you really want to investigate the world around you I suggest a bicycle. Let me explain how I got on that path.

Last Fall, the Boston MBTA shut down one of the subway lines (Orange Line) for 30 days so that repairs, that would normally take 3 years, could be done in just a month. Buses were used and they also offered free Blue Bikes to help folks get around. Blue Bikes have been available for a few years and there are 4000 bikes at 400 sites in 11 communities in the Boston area. With an App on a cell phone (of course) bikes can be rolled out of a docking station and a low speed tour of the city can begin or, a 14 minute walk to work can be done in 4 minutes. I had been looking at those bikes for a while but at what looked like $3.75 per ride it seemed that walking the ¾ mile each way to my office was a better choice. Needless to say the word free caught my attention so I signed up to try it.

The bikes are very heavy duty touring bikes that are designed for people who don’t ride bikes. If the bike isn’t put back in a Docking station when you’re done the bill could be as high as $1200, so it’s not a cheap bike.  The seat is easy to adjust and there are front and rear handbrakes but the best feature is the transmission. I’m not sure how it works but without any derailleurs showing or gear sets exposed, the right side handgrip makes instant gear changes when turned.  Turn it one way and it feels like three foot cranks for a bike length of travel like a cartoon character. Turned the other way and one rotation give what seems like a 100 ft of travel. Most important, its immediate, with no clanking of gears or jerking of the pedals. There are LED lights front and rear that flash when the bike is in motion, a great safety feature and the fenders are enclosed to reduce splashing.

After a few days of use, I was hooked. It was Fall and the very best time to be on a bike in New England when leaves were changing on the Rose Kennedy Greenway and the boats were still in the harbor sailing about.

As the free ride was coming to an end I looked into the costs to continue and it was very reasonable. A one year membership brought the cost down to less than $10 per month. By then it wasn’t just back and forth to the office,  but also lunch rides to the North End and Chinatown. I began to look at where the docking stations were so I could expand the range since membership gives you 45 minute rides at no cost, and   $2.00 for every 30 minutes there after. They don’t want you to take the bikes out for the day so the answer is to just find a Docking Station, park in under 45 minutes and take another one to restart the clock. The fact that there is a Docking Station just out the door at South Station and another across the street from the office on State St makes every trip very easy. 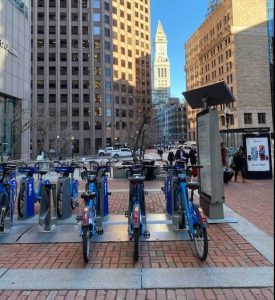 Street level on a bicycle is a lot different than street level in a car. First of all you’re invisible, nobody sees you and nobody hears you. Not pedestrians, not cars and certainly not trucks or buses.  That just reinforces the bumper sticker that I have on my cars that says: “Loud Cars Save Lives”. I have determined that sidewalks are safer than bike lanes,  but pedestrians are not at all accommodating and really don’t want to share the space. There are Bike lanes but they seem to be the perfect spot for delivery trucks, Uber drivers and Post Office trucks. The trouble is that to get around those stationary objects there are only two choices, get on the sidewalk or swing out into the travel lane to clear fenders and any doors that may suddenly open.  Cars in the travel lane blow the horn at people on bikes because they know you don’t belong there and besides you’re moving too slow.

Riding a bike on city streets gives the rider plenty of time to inspect the pavement for potholes, cracks and even frost heaves this time of year. Bumps that a car wouldn’t feel become a jarring hit on a bike that has zero suspension travel. There are a few holes on State street where the bottom can’t be seen. They’re not big holes, maybe 4” across, so a car tire would roll over easily but a bike tire would actually fall in  while the rider would keep going. I have not been bitten by any obstacles yet, but I am prepared. When my kids found out that I was riding a bicycle in Boston they insisted that I buy a helmet to wear. There is a sign on every Dock that says, according to Mass law, riders 16 and under must wear a helmet and it is recommended for grown ups.  I guess when we get older our heads don’t need protection? What?

Now when I catch the commuter rail into town there is a lightweight helmet hanging off my briefcase . Some of my “train buddies” know that I have been taking a Spin Class every week for the last few years and wanted to know if I was so old that I needed a helmet to be able to ride a stationary bike. Very funny. There is an Allstate ad TV that shows ‘Mayhem’ getting launched off a stationary bike so I guess it could happen but I am careful on both.

Since most of the tourists have left town the streets are not as crowded and there is more space on the sidewalks, but there is still another challenge, Boston weather. The cold can be ignored at least so far but the rain and snow will be another matter. I know that, unlike our winter cars, Blue Bikes will not be switching over to snow tires any time soon so snow covered streets are still an unknown. I have come to some conclusions about riding in the rain however. It turns out that the trip from South Station to my office across from the Aquarium is a 16 minute walk or a 4 minute bike ride. I can hold an umbrella while I am walking (I’ve done it for years) but not while I’m riding a bike. I’m no Mary Poppins. So is it better to walk with an umbrella for 16 minutes or ride a bike without an umbrella for 4 minutes? That depends upon how hard it is raining. The few rainy days so far have been light and the bike has been selected. The one real downpour prompted me to wait a few minutes (that’s how long it takes for Boston weather to change) as the weather App showed the storm passing by soon.  I’ve gotten damp but not really that wet, yet. Snow might be a different matter.

I do have a couple of those thin plastic rain coverings that I got in a car show goodie bag years ago that I could try. They look like one time use bags folded into a clear plastic envelope about the size of a pack of cigarettes. I know that I could never get them folded back up to the same small envelope so it would be easier to just toss it out. Anyone remember Harry Morgan on Dragnet trying to convince Joe Friday that he could fold up his new plastic raincoat to fit back into the plastic bag it came in?  Send me an email if you do, I’d like to know if anyone my age is still reading this column.

I will be reporting this winter as the snow begins to fall and test my riding skills. Wish me luck, it will be fun.