Driving into Sweet Berry Farm I was surprised by the number of non-Porsches already parked on the lawn, more than 60.  The lawn provides overflow parking when parking demands become excessive.  It was apple picking day and I had never seen it so crowded.  On top of that, well before 11AM we had more than 90 Porsches squeezed into the grass field. Later we learned that many of the late-arriving Porsches had attended Audrain’s Cars and Coffee at the Polo grounds in Portsmouth. Our last count hit 100 or more. View additional photos of the day from Larry Levin. 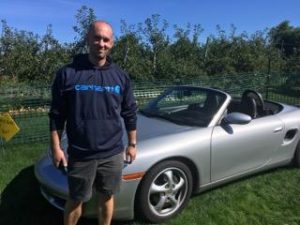 One of the early arrivals was Kevin Donaldson and his well optioned arctic silver 99 Boxster.  With full black supple leather, carbon fiber, along with white gauges, this Boxster is not ordinary. Kevin is the second owner of this recent February purchase showing just 37k.  Kevin said that he has had a fascination with the Porsche culture of brand engineering. 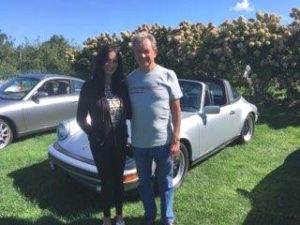 Bill and Kathy Beauregard parked their silver, with blue interior 1980 Targa that they have owned for 35 years.  They are the second owner since 1986.  Although re-painted some years ago it is very clean and original looking.  Currently they have 90k miles on it, making it no garage queen.  Kathy added, to stay dry when caught in the rain with the top off, just drive really fast and the rain just goes over the top. 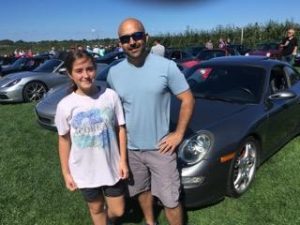 Todd Garcig and his daughter Haley arrived in his unmolested gray (black interior) 2007 911 S.  This is his second Porsche and has owned it for eight months; he is the third owner with the odometer showing 84k. The six-speed manual includes the Chrono package and white gauges.   His previous Porsche was a 79 911 S 2.7 liter that he kept for a year. Todd always wanted a Porsche saying, “unless you drive a Porsche it is hard to explain the driving experience”. 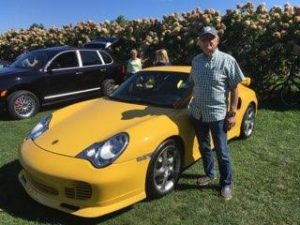 Bob Anastasi, a familiar participant in all things Porsche came in his recent purchase, trading his 2018 Carrera S for a speed yellow 2005 Turbo S with carbon fiber option, yellow gauges and stitching   With a sticker price of 167k, this P car still has all the original bling. Bob, the third owner, purchased the car six months ago showing just 28k miles.  Behind the wheel Bob says that it is more analogic as opposed to the more modern digital, giving more feedback to the driver. 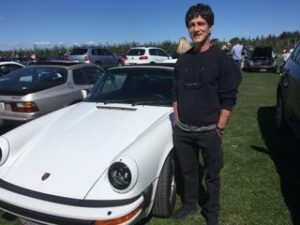 Brian Kramer parked his white 911 SC cab with some of his added attributes, such as Jeep led headlights and a large stereo install in the frunk.  Brian is the third owner with 74k when purchased, now showing 116k..  The Porsche has a new top and seats, rebuilt transmission and other repairs.  Brian replaced the alternator himself.  Repainted an unknown time ago, the fit for an older cab looks very good; all the clearances seem original.  This is Brian’s first Porsche; since he was a little kid he always wanted a Porsche.  He doesn’t want to drive a perfectly restored Porsche; he wants a driver.

Our last SoBo of the season is scheduled for 17 October (10-Noon) at Sweet Berry Farm, 915 Mitchell’s Ln, Middletown, RI. The event as always is FREE, and no pre-registration is necessary. The only requirement is to park on the grass is your Porsche. A Porsche logo sign should be in place directing you to the parking area.  Sweet Berry Farm is child friendly, encouraging small children to enjoy a working farm, so when entering and exiting, drive carefully. And, as always, for any SoBo related questions, please email me at:  rr356c@aol.com