Last night we attended a special event at the Audrain Motorsports Club in Newport.    We expect that most people know who Donald Osborne is from his appearances on Jay Leno’s Garage on TV (CNBC) and his appearances with Jay on the Audrain Museum You Tube Channel,   and also at Newport Motorweek and National Classic Car events.   If you were involved in motorsports way back in the 70’s you probably even know who Judy Stropus is.  However, for those PCA members, who weren’t yet born, please allow a short history update.

Back in 70’s there was no such thing as Computerized Timing and Scoring with transponders in every car.  Instead Timing was done manually with banks of stopwatches and rows of people with paper and pencil,  all unpaid trained volunteers,  sitting on benches as the official SCCA Timing and Scoring staff.    There was always a delay before the Official Results were announced, particularly during the long races where there were multiple pit stops. It was possible to lose track who was leading.   Disputes and confusion were frequent.  There were no Jumbo-tron screens keeping everyone informed in real time on who was leading.   Although there was often a public address loudspeaker system, it frequently was impossible to hear the commentary over the noise of the racecars, even when the PA was actually working.  The solution to knowing what was going on in the race meant that the spectators and all the individual race teams had to keep their own Lap Charts and Timing Sheets.

This is where Judy Stropus comes in.   She had a special skill of being able to accurately track lap times and positions of the entire field of a race.    She was legendary for the accuracy of her charts.   So much so that, at the Trans–Am and Can-Am races in the 70’s,  the SCCA frequently  crossed checked her sheets with theirs before releasing the official results.   Her timing sheets changed the results in at least one Trans –Am race and helped Race Teams win others.

It truly is an extraordinary talent.   Her ability to focus on the conflicting tasks of watching the race cars go by while simultaneously writing down all the car numbers and their times without missing any of them.  And in addition to that task, accounting for the cars that may have stopped or crashed on the part of the track she could not see.   She did this all using just a single stopwatch and without taking a break, even for the 24-hour races.   She worked for many of the major teams of the time,  most notably for Roger Penske and Mark Donahue when they were a major force in the Trans –am, Can-am Series and the Indy 500.  She taught others her system of timing and scoring, but only a few were able to master her system.   Only Judy seemed to have the focus and built-in math skills to achieve such accuracy.   She laughing admitted to having made one mistake in her long career.   But that’s a story for her to tell.

She gained worldwide recognition and respect during a time period when women in motor racing were yet to be taken seriously. Judy was a primary force in the movement to allow credentialed women into the working pits in NASCAR and USAC/Indy Car.  She was a significant instigator in providing wives and girlfriends with a meaningful way to contribute to the team and be recognized as much more than decorations and distractions.

Judy herself was an accomplished driver, an author and ran an award-winning public relations firm.   She was also part of the legendary original Cannonball Baker Sea to Sea challenge.   Her all woman team made it to Texas before the Cadillac Limo they had borrowed for the event came apart. 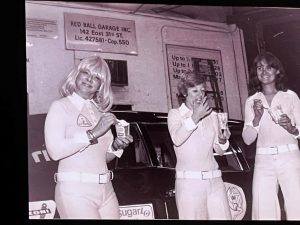 It was an astounding evening with a legendary member of Motorsports and well worth the trip to Newport and back.   Stay tuned to the Audrain Channel on You Tube and hopefully the video of the event will be released soon.  Even if you weren’t around for the wonderful days of Motorsports in the 70’s you need to hear the stories and know the History.