Here’s another challenge to you, our readers, to recount your experience with the car purchase that got away for you. I’ll kick it off with my own, actually two cars that got away for me. (send your story to the Submissions Team!)

The first one was in 1975. We decided to sell our fairly new car, a Simca Ti and buy a new car. This was prompted by a rumor that Denmark would increase the tax on new cars from 200% to something higher. Our new car choice was a BMW 316, but unfortunately there was a long wait on that, so we ended up with the worst car we have ever owned, an Austin Princess. By the time we sold it two years later we had gone through a transmission and the paint had started peeling off the car. Other than those “minor” issues it was a great car, roomy, and with a fantastic air suspension. I have always regretted never owning a BMW.

The second is much more recent. In January of 2020 we received an email addressed to the NER board from a woman whose brother had just passed way. She explained that he owned a Boxster that she needed to sell, and could we help her? She also explained that they had received an offer for $15,000 for it and had no idea whether it was reasonable. I responded that I was happy to do what I could and that the first step would for me to take a look at the car to determine exactly what it was. So I drove down to Wrentham where the car was parked, got the keys to the car and the garage and drove over to take a look at it. On opening the garage, I saw that it definitely wasn’t a Boxster, but rather a 996, a C4 convertible, black. I fired it up and pulled out of the garage. I don’t remember the exact mileage, but it was somewhere in the 70,000 mile range. The engine ran will with no smoke. Next, I examined it closely looking for any flaws. Then I opened and closed anything that should. The only one I could find was that the plastic around the passenger electric seat switches was missing. 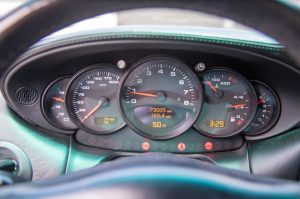 I email the lady back and told her what the car actually was, and that the offer they had seemed very low. I offered to post the car on the NER Facebook group and see if anyone in the club was interested in making an offer.

Unfortunately, all I got was a couple of feelers from the NER membership and no one was interested enough to even look at the car, much to my surprise.

By now the lady and her brother’s executor were anxious to get rid of the car and they asked me if I would take it for $15,000. I asked my wife, and she wasn’t keen on the idea. She felt that going from owning 5 cars to 6, two of which were Porsches, and one a Caterham, was a bit too much, especially since we only have garage space for 4. It didn’t help either that the car was black, a color my wife isn’t keen on. Also,  this was early in the epidemic, and we had no idea what effect it would have on car prices, so I reluctantly declined. 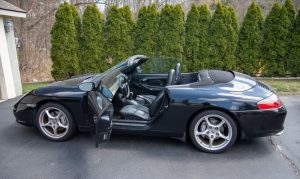 As you all know I could have flipped the 911 and made a good profit or sold one of our Boxsters and kept the 911.