After a year and a half driving Rob’s 2014 C4S it was time to give the car back. It wasn’t a bad deal for him either as he had my 2015 Turbo S in his garage in Arizona. There was a tire/rim swap to be done between the two cars so it was necessary to have them both in the same place at the same time , at least for a while. Since the driving season was at full speed in the valley of the sun we decided that it would be fun to run both cars at a PCA Driver Education event when they were both in the same garage.

I set about getting a shipping company to pick up his car in Medfield and buying plane tickets and he worked on getting us into the same Run Group at the DE so we could play on the track together. To level the playing field a bit we put the Hoosier race tires on his car to compensate for the extra 200 hp that the Turbo produced. That was after a few modifications, like exhaust, intake plenum, and Cobb ECU tune boosted the output from 520hp to around 650hp. While I was driving his car Rob and his crew were playing mechanic on mine. With four year old street tires on my car we figured they would lap at about the same times.

The pick up went smoothly considering that it was in the middle of a snowstorm. It was pointed out to me that modern car carriers are now built so that the sides are open and the drivers door can be used for easy entry/exit. Apparently, in years past drivers had to get in and out of the car by climbing through the window.  For the 300lb driver that picked up this ride that would’ve been a nonstarter. 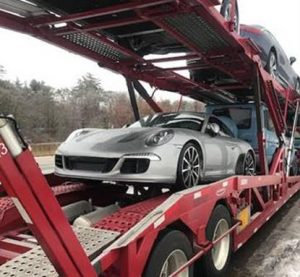 The trip out to Goodyear only took a week and the cars were finally together. Tires were swapped and the cleanup was done by Louie, Robbie and Tommy and they were rewarded with rides back and forth to school. Louie even ran errands with it after calling me to get permission. Great crew.

With the Arizona Motorsport Park less than a mile from the house the oil wasn’t even warmed up the morning that we drove both cars over to the track. It was chilly as the sun came up but turned into a great day for driving. Our shelf paper numbers looked great on the doors. The only panel done in metal anymore are the rear fenders so my old magnetic numbers have been retired to the back of the garage door. Rob made it easy by requesting numbers 31 and 311, all straight numbers in the Porsche font. Details are important.

Our advanced run group didn’t start until 9:30 so we had time to go back to the house for breakfast after dropping our gear in a premium parking spot.

The track is flat as a pancake, think big autocross, and over three miles long. With a couple of decent straights the C4S was going to have to be better in the turns to keep up with the Turbo S. The grippy race tires were definitely up to the task. There were to be four 20 minute sessions and they kept to the schedule down to the minute, very impressive.

The first session saw me finding my way, I didn’t want to be the guy who went off into the dirt and there was a lot of dirt. The video I had watched at home was helpful but it was tough to look ahead which what we tell every new student to do at a new track. If you know the track it’s easy to know when to keep your right foot down and when to tiptoe. As I was still learning, Rob was driving away. In the second session I had a better feel for the playing field and was able to keep up a little better. I chased him for a while but couldn’t get around him, he just went way too deep into the turns. He motioned me by to see if I could drive away but I couldn’t. We ran nose to tail the last ten minutes of the session, passing other cars like a train. Great fun.

By the third session it was catch me if you can. I had a better sense of the PCCB (Ceramic brakes) and could brake later that the C4S. Rob was still keeping up well but he ended the session early after his brakes began to fade. Turns out, he also corded a new Hoosier tire, a left front (we were running the track clockwise), so I know how hard he was trying. All in all, a terrific day at the track.

The Big Dog is now back in Medfield having made the trip on the same truck with the same driver that took out the C4S. Strange how some things work out.

I may give the ’72 a rest this year and run the Turbo S in the Autocross series just to keep the young guys honest. I wonder how the Turbo S would look in a Martini suit? We’ll see. 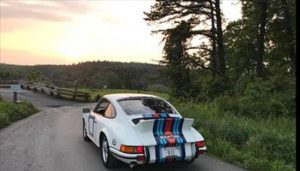 Meanwhile, Summer is just around the corner.