NER’s Second DE of the Year – Palmer CW in June

A few days before the event the weather report didn’t look good but your faithful DE Crier called in a few favors and the weather was darn near perfect all three days.  You can thank me later.  As with Thompson, turnout was a bit on the low side – 95 drivers in total. The positive aspect of this was that run groups were combined which allowed longer run sessions.  Plenty of drive time and still not too much traffic.  Everyone behaved nicely and the only incident of the weekend was the idiot DE Crier crashing Kristin Larson’s electric scooter.  Ouch. Thanks for not laughing, Adam.

As is my usual practice I looked for a new driver and found a very good story.  Steven DiCato, a nice fellow who I had instructed last year at Tamworth (and whose dog was previously featured!), convinced his cousin Chris Costain to attend.  Chris, not wanting to abuse his street ride (an Acura I think – you can see it in the picture), rented one of the Palmer Miatas. (Note:  these are nicely prepared race cars with a full cage that are a blast to drive.  You can rent them and have an instructor provided with Palmer’s “Arrive and Drive” program.) Chris had a blast and was one of the fastest in the Green run group.  Steven immediately went to work on convincing him to buy a Miata that they could share.  But perhaps that will have to wait until Chris’ wedding in September to Tara Gambardella – she was in attendance and probably dismayed as she watched her husband-to-be start the slide down the slippery slope. 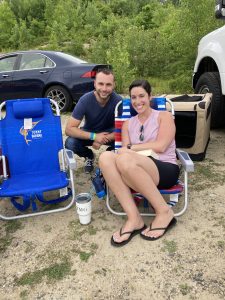 I had another nice conversation (at the Saturday night BBQ social) with Jeff Zern of the Riesentoter Region (that’s Eastern Pennsylvania and, yes, there is supposed to be an umlaut over the “o.” According to Google Translate that means “Giant Dead” but they claim it means “Giant Killer” in reference to Porsche slaying cars with greater displacement on the racetrack).  Anyway, Jeff had heard good things about Palmer and wanted to drive it in his Cayman.  He was exceptionally grateful for the help he got from Stan Corbett in registering, getting correctly placed in the White run group and even getting advice on hotels and routes. He also was very complimentary about the event organization and the driver etiquette on track. Nice to have some other region visitors!

As to the BBQ social, thanks to Judy Mansing and Pam Mascetta for setting it up and, once again, having a nice variety of beers to drink (and I presume wines but I can’t speak to that – I enjoyed some Lagunitas IPA and detect the influence of the NCR track chair in that selection).  Note to self:  talk less and line up sooner for BBQ so you get more than two ribs.

Here are the run groups advancements from the Palmer weekend…

And finally, enjoy the pictures of some notable Palmer Pups! 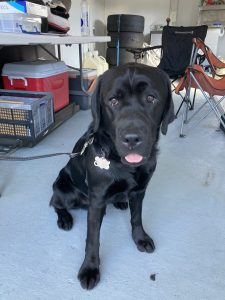