I went on another Porsche adventure after my January visit to the Porsche Experience Center in LA) and wanted to share it.

After the success of the Werks Reunions on the Monterey Peninsula, past PCA President Manny Alban, an East Coast resident, put forth the idea that the event should also be held in the East. What better place and time than the Friday before the prestigious Amelia Island Concours? When planning for the event was finalized, PCA announced the theme would be the 20th Anniversary of the Boxster. As an owner of a 2003 986, I knew I had to go to take part in this celebration of the remarkably successful little roadster. 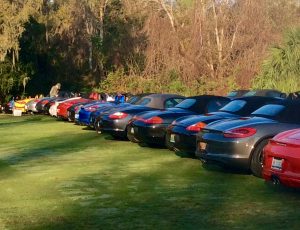 This would involve a two day drive down to northern Florida, and a two day drive back - all to attend a one day car event. Some would call me crazy. I think my loving wife may have, as she decided the trip was too long for her. But she told me to go for it. Thanks, honey!

"By the way, my 14-year old Boxster performed flawlessly over the 2,400 mile round trip. What a car!"

I am an active participant in a PCA Special Interest Registry - the Boxster Register. If you haven't joined the Register for your car, I highly recommend it - the experience, advice, and most of all the camaraderie of fellow members - is great. In talking to some of the other members I found that other Boxster owners were also planning to attend. One of them, Bruce Russell, lives near Richmond, VA - about halfway to Amelia Island - and kindly offered to let me stay with him and then drive in tandem the rest of the way. Bruce, a fellow Boxster enthusiast with a 986, also owns a Guards Red 1984 911 3.2 Carrera Targa that he was going to enter in the judged field at Werks. So he has his toes in both the air- and water-cooled pools.  By the way, Bruce is also the advocate for the 911 3.2 Carrera Registry.

I took advantage of some unseasonably warm February weather to get my car ready for the long trip, including a full machine polish paint correction, sealant and wax, and interior recondition. Hey, we needed to look presentable among the sure to be dazzling display of pristine P-cars. As the date to leave approached, my excitement for the trip grew. 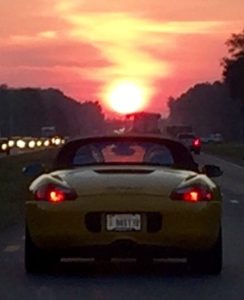 Then, the weekend before, I got a message from Bruce that he and his wife had just been involved in an accident. Their car (not one of the Porsches) had been rear-ended! While not seriously injured, they were clearly shaken up - and Bruce needed to cancel the Werks trip. While I was very thankful they were OK, I have to be honest and say I was disappointed not to meet Bruce on the trip.

Oh well, the show must go on and I left not so bright...but very early...the Tuesday morning before the Friday event. I made it as far as northern North Carolina and got a room. While there, I received a message from another Boxster Register member - actually the advocate for the Boxster Register - John Novotnak. He is also the Editor for the "Photo of the Week/Photo of the Month" feature of the PCA eBrake News email. John said he and his wife were also staying overnight in NC not far from me, so we agreed to meet at his hotel the next morning and drive in tandem. Great! It was comforting to see a Porsche badge in my rear view for the final 400 mile leg. John was driving his 2009 Cayenne to be able to carry all of his camera equipment and other goodies to the event.

I arrived in Yulee, FL where I had booked a room. It was about 12 miles inland from the event venue at the Omni Resort (and quite a bit cheaper than rooms on Amelia Island, which fill up due the Concours). While there, I ran into Bill King, one of Bruce's friends, who was chosen to display his beautiful blue 981 Boxster in the special grouping of cars representing each of the Boxster's four generations- 986, 987, 981 and 718. Bill is a former PCA National Concours award winner, and the owner of many other fine autos. Like all PCA members, he was very friendly and welcoming and immediately suggested we have drinks and dinner on the beach in Fernandina Beach. Fun! 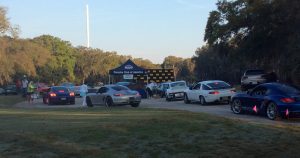 Arriving at the entrance

The next morning, I located a self serve car wash to freshen up the 986. Every car wash in town seemed to be in use by a Porsche owner! I had brought a bucket and all my normal detailing products, and it was a pleasure to spend a few hours on the car in the warm Florida sunshine. Then it was back to the motel where some other Boxster Register members were arriving. One of them was Lee Lichtenstein, a member of the Chicago Region who drives a 2008 Limited Edition 987 - in Orange. You know when Lee pulls up, trust me! Lee was there with a friend, and suggested we go to dinner that night. He regaled me with stories of the thirty three - count 'em: 33!  - Parades he has attended. After Werks, he was going to Treffen Hill Country in Texas, and then the Spokane Parade, followed by a trip to Canada and Alaska! Lee gets around.

Lee is also a member of the Cayman Register and had organized a caravan of about 15 Boxsters and Caymans to the event. We gathered in the pre-dawn hours, as traffic on the Island for the various auctions and Concours is quite heavy. Matters were made worse by the organizers changing the Concours from Sunday to Saturday due to a rainy forecast. Now attendees and participants from around the country had to arrive early - on Werks day. Ut-oh! 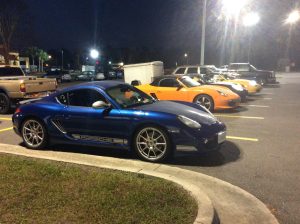 We arrived at the event venue, checked in, and were provided with a nice goodie bag filled with some nice items, including a beautiful poster from Pirelli (the main sponsor).

Volunteers directed me to the Corral parking area, where Boxsters were given the honor of being placed in the front of the field as part of the 20th Anniversary celebration. Sweet! 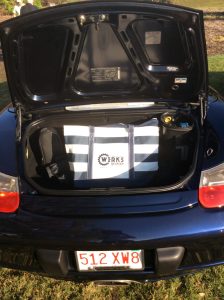 Plenty of room for goodies back here

Organizers announced there were nearly 700 Porsches in attendance between the Judged and Corral fields. It was awesome.

PCA invited a few celebrities to attend, among them Magnus Walker of Urban Outlaw fame, and Jeff Zwart - multiple winner of the Pikes Peak Hillclimb and the photographer behind those back page shots we all love in Panorama. Manny Alban interviewed Jeff.

It was cool to see the four special Boxsters and appreciate the evolution of the model. I ran into my new friend, Bill King, again. 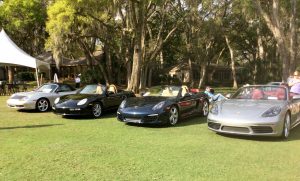 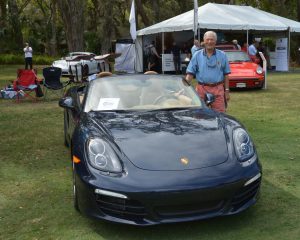 Members of the Boxster Register gathered for our group picture in front of the cars (Lee is third from the left - wearing orange, of course - and John and his wife are at the far right). 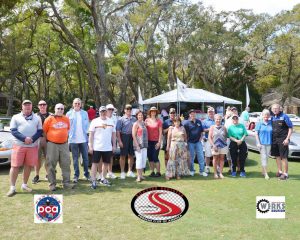 The final special guest of the day, before the judged award presentation, was Grant Larson. For those that don't know the history of the Boxster, Grant was the designer of the original prototype car that was shown and caused such a stir at the 1993 Detroit Auto Show. Grant was then heavily involved in the development of the 1997 production version. I had the privilege of briefly chatting with Grant and thanking him for the work he did on the 986. When I tell others about this, I simply say "this was the guy who invented my car!" 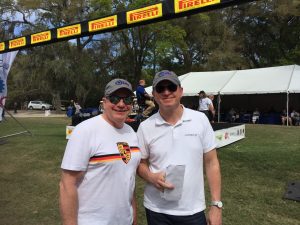 Finally, the day came to an end and it was time to go back to my room to get ready for the long ride home. But before, I left I got a message from my friend, Bruce, from VA.  He asked if I could pick up a polo shirt he pre-bought, his goodie bag, and the plaque that would have been displayed on his Targa - and deliver them to him in Richmond. My pleasure! 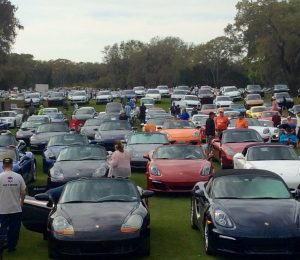 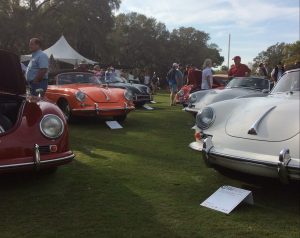 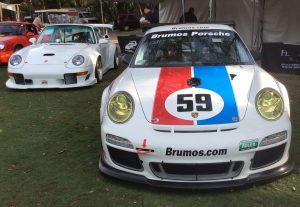 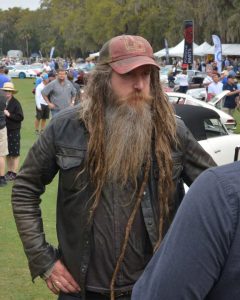 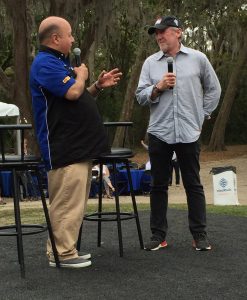 After yet another pre-dawn departure, I arrived at Bruce's house around 2PM. Even though it was our first face to face meeting, we were soon immersed in talk about Porsches over a few cold German premium lagers like long time friends. Bruce and his wife (and dog, Abby) couldn't have been more welcoming and opened their beautiful home to me. 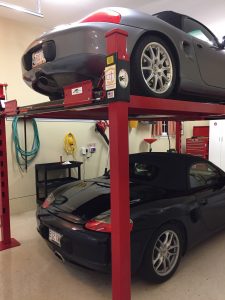 Bruce decided we needed to continue the German theme with grilled brats, sauerkraut and German dumplings. I needed to gas up for the final leg back to Boston, so I suggested Bruce drive my car - he seemed to enjoy himself! Then, to my great honor, he let me take the left seat of the Targa. Having never driven one before, I initially struggled with the floor attached brake and clutch pedal, and the 5 speed tranny. Bruce said the car had the old 915 transmission that simply couldn't be shifted quickly like our more modern Boxsters. I adjusted and then enjoyed the unique sound and thrill of driving an air cooled 911 over the twisty back roads around his house. We tucked the cars away in Bruce's garage and - needless to say - I went to sleep with a huge smile on my face! 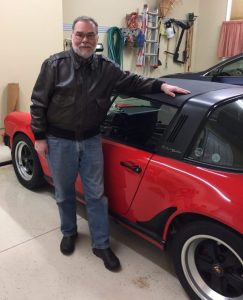 And for the final bit of PCA hospitality, Bruce and Abby, the dog, got up early to make me breakfast and prepare a few delicious Virginia-baked-ham-and-biscuit sandwiches for the ride home!

"On the way home I had plenty of time to reflect back on the experiences of the last few days. I can truly attest that it's not just about the cars, it's about the people."

By the way, my 14-year old Boxster performed flawlessly over the 2,400 mile round trip. What a car! It needed to, because of the big East Coast snow storm that rolled in just after I got home. Phew!

On the way home I had plenty of time to reflect back on the experiences of the last few days. I can truly attest that it's not just about the cars, it's about the people. Special thanks to the organizers and volunteers at Werks Reunion Amelia Island, and to my friends John, Lee, and Bruce. Porsche cars are great, but it's the PCA people make club membership really something to cherish.

PS: now it's time to start getting excited for our next trip - the 19th Annual Blue Ridge Boxster Summit in Little Switzerland, NC (www.brbs.org). This event is not affiliated with PCA, but most attendees are members.

Thank you, Gary, for sharing your story with us! Do you have a story to share? Email it to us with pictures (please be sure to add photo credits) and we may be able to use it in the Nor'Easter, the website, or both.

Inspired to take an adventure of your own? Check out the 62nd Porsche Parade in Spokane, Washington in July.