With the threat of rain, it would be unlikely that we would have the numbers of P-cars we had last month. By 11 AM we had 27 Porsches parked on Sweet Berry’s lawn.

An early arrival was Kevin King, a member of the Space Coast PCA, which is located along the east coast of Florida, in Volusia, Brevard, and Indian River counties.  Kevin parked his first SUV (wanted all wheel drive), a 2015 Macan S, explaining his modifications: high performance air intake (from Flat 6 Motor Sports), COBB ECU tune, MBRP muffler removed (has a bark), Niche wheels, and painted red calipers. A driver, he purchased it with 33k miles, now at 65k.  Kevin also has a 2017 911.2 Carrera, and he and his girlfriend purchased a 2002 996 Carrera in 2015. 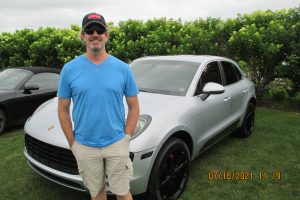 My eyes focused next on a very original looking silver 928 S with a maroon interior.  Paul Mackin’s 86 ½ 928 S is a five-liter (four valves per cylinder) cruising machine currently logging 96k miles.  A Datsun enthusiast, one of his friends had it and recently offered to sell it. Paul’s first Porsche was a 924 that was sold to him on the cheap because of a rod knock.  With motor honey sloshing in the sump, he drove that 924 Porsche always close to home.  Paul says that “the 928 S ergo metrically fits me like a glove”.  Paul plans to buy another 928 from his friend as a parts car and plans on taking it apart so he knows how it's all put together 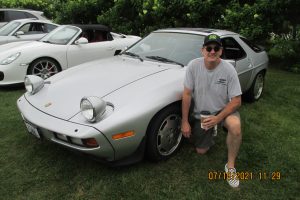 John and Diane Buckley parked their recent purchase (two weeks), a stunning Raspberry red metallic 97 Carrera S with a popping tan interior. NER PCA members, they also have a 78 SC (owned since 84), a Petrol Blue metallic 79 928 with cork leather interior, and a 2000 Boxster S purchased new as a track car. 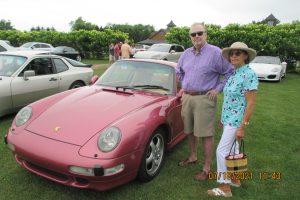 Nick Pasyanos and his friend Patty Cronin arrived in his white 2012 Boxster Spider that has a red interior; with the top down, it definitely is an eye stopper.  Purchased on Christmas Eve in 2020 in Florida (by way of Narragansett), it was a private sale with odometer reading just 32K.  A 45-year Corvette owner, his new Vette is mid-engine, so he thought a Porsche, also being mid-engine, would have the same kind of feel. He loves the way the Spider drives, feels engaged. For all the years he owned Vettes, he never had them garaged, so he is excited that in two weeks a garage will be built on his property. 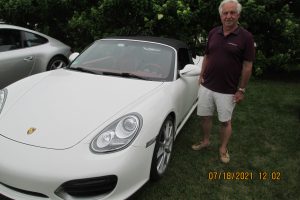 A side note:  Rosemary recently celebrated her 80th birthday and Paul and Jackie Soares gifted her a Porsche logo cutting board. 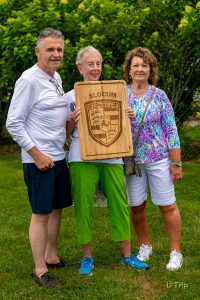 The next SoBo is scheduled for 15 August (10-Noon) at Sweet Berry Farm, 915 Mitchell’s Ln, Middletown, RI. Free, the only requirement to park on the grass is your Porsche. A Porsche logo sign should be in place directing you to the parking area.  Sweet Berry Farm is child friendly, encouraging small children to enjoy a working farm, so when entering and exiting, drive carefully. And, as always, for any SoBo related questions, please email me at:  rr356c@aol.com