My longtime reader may recall a couple of columns that told the fictitious story of our dog Turbo and cat Gordo (RIP) participating in Autocross events. In point of fact, Turbo would probably be the least likely canine to have done so as he is a terrible car passenger. Rosemary believes this stemmed from an incident in his youth when I took him for a ride in a rental SUV.  Our minivan had been in an accident (not my fault!), and we were provided with a GMC Yukon.  I had no experience with a four-wheel-drive vehicle, so when it snowed one night, I took it out for a trail run and invited Turbo.  In two-wheel-drive, it fishtailed up a hill, but when switched to four-wheel drive, it powered up the hill as if it was dry.  Unfortunately, we then had to go down the other side of the hill, and four-wheel drive doesn’t help braking, and we slid (gently) through a T-intersection into a tree.  Turbo, unbelted in the passenger seat, met the windshield. Mind you that Turbo had often hit a tree with more force while chasing a squirrel, but it apparently got stuck in his dog brain permanently.  So now, when he is in a car, he is very agitated, pants rapidly, and refuses to lie down.  We have tried all kinds of drugs, including Benedryl, valium, and CBD oil which do cause him to lie down but don’t stop the panting and make him goofy when we get where we are going.  So Turbo is not a candidate to go to DE events.  But there were two very nice dogs at the recent NCR Tamworth event, and they appeared to enjoy themselves.  Dogs are allowed at DE –  of course, they must be leashed – and it is nice when whole families participate (Chris DeGrace had his kids there, for example).  Silver (my student’s dog) and Bruce were very well behaved and added to the fun. 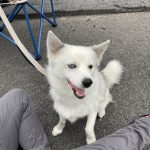 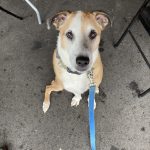 NCR put on another nice event, and I managed to get in 3 runs each day between the raindrops (open cockpit and no rain tires and no interest in tempting the fates).  I was slower than previous Tamworth efforts, which I attributed partially to a less sticky track but more to just inconsistent driving.  I struggle more at Tamworth than other tracks. I’m trying to get better with using brake markers, but my speed through turn one at Tamworth can vary by as much as ten mph.  Also, there are two different approaches (or at least I think there are) to the Turn 2A – 3 sequence, and I rarely get that to my satisfaction. Finally, the braver part of me says I should be flat from Turn 7 through 10, but my right foot doesn’t seem to buy into that.  (When I look at data, I’m at 1.5g and over 90mph, so my right foot may have a valid point.)  In any event, the 15-year-old SCCA wunderkind is 4-5 seconds faster than me in a similar car, so clearly, I’m leaving something on the table.

While I love the track at Tamworth, the infrastructure is lacking there and you are required to leave your trailer in an upper gravel parking lot to leave room for all the track cars in the paved lower lot. This makes for a hassle, particularly when it rains on and off. The good news is that the upper lot may be paved in time for the second NCR event later this year.  The other drawback to Tamworth is that the hotel accommodations are pricy and weak. Thanks to Kristin we were booked into a really cool Airbnb – a bit off the beaten path but very spacious – and it made for a nice social weekend. 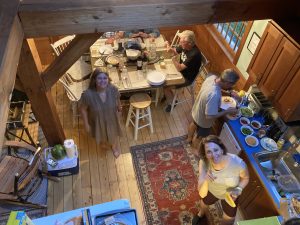 And bad news for the Jamaican Bakin’ Endurance race team.  We are still in the process of fitting the new motor as we wait for the oil cooler to come back from the cleaner (a fancy aircraft supplier outfit that gets all the little bits of metal out so we can reuse it) and wrestle with some electrical connector mismatches between the new wiring harness and old ECU. But the bad news is that the American Endurance Racing series in which we run changed the rules for next year and has outlawed cars with a power to weight ratio (Dave correctly points out that it should be called weight to power ratio) below 9.  Our old motor had 400hp which would have been OK with our 3,600lb car (with driver and fuel) but the new motor is capable of 500hp. That was $20,000 well spent!  [Editor’s note:  I redacted that – Rosemary might read your column, Bill.]  Our hope is that we can find an ECU tune that limits the horsepower, spreads it over a wide band, and produces lots of torque. 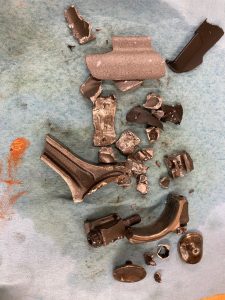 We also did more of an autopsy on the dead motor – the oil pump is fine, so it appears that either it dropped a valve or the connecting rod just failed.  Enjoy the pictures of the debris!

Finally, by the time you read this, we will have had the Summer Party.  I’m sure it was a blast, and I hope I did well in the Cornhole Contest.  Let the record show that I was the Cornhole winner at our own regular summer party, defeating one PCA board member while another PCA board member who talks a lot of trash was a no-show.