I got fired. Booted off the board. Ten years of service, and I get an email, not even a phone call. No pension, no gold watch, not even a Gala to go to. Crumbs and crickets. And yet I still have to write a column. Oh well.

(Only kidding, of course. Term limits.)

So I needed a new job. There has been some minor controversy about whether or not a report is required to be put online after each DE event. Easy solution – I agreed to be responsible for doing it. I go to most of the events, don’t mind writing, doesn’t require research – just take a few pictures and pay attention. Write up what the weather was, mention the sponsor, who got promoted, who attended for the first time, what kind of IPA they had at the social, who did something stupid, tell a few stories, etc. Adam is calling this position the “DE Crier.”  So I’ll do my best, but I’m going to need some help.

For one thing, I won’t make it to every event. And in that case, I will need to have some spies who will take notes and talk to me afterward so I can write it up. And send me some pictures. The other thing is that to make this enjoyable reading, I will need to tell some stories, and those will come from you. So if you are at a DE, please be cooperative (and interesting) if I come up and talk to you. What kind of stories? As we always say, it’s not just the cars; it’s the people. I have met some wonderful folks through my PCA DE activities, and here are a couple of example stories…

I met Mark Schnoerr at PCA autocrosses, where he would flirt with FTD despite driving a pretty stock 914 (unless he was beaten by his wife, Sigrid). Mark was a dual-brand guy – he also ran a BMW E36 – and he did a lot of DEs as well as autocross. 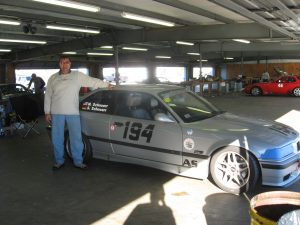 At first, I didn’t own a trackable Porsche but did an occasional DE in my BMW E34 sedan and recruited Mark to be my instructor. Despite its heft, the E34 handled remarkably well and was a 6-speed V-8. And Mark would not let me give a point-by to a Porsche – just pushed me to go faster. (Two days at Watkins Glen and I drove home with metal on metal brakes.)  Later, after I had my Cayman and was doing regular DEs Mark instructed my daughter and, for one magic day, my wife. Rosemary (her nom de guerre is Rosemario) was comfortable, if mid-pack, as an autocrosser. I talked her into a DE at NHMS, and afterward, she said, “no thanks – too fast.”  But she was going to be a spectator at a one-day DE at Lime Rock where I had arranged Mark to instruct my daughter. Nora wound up with a conflict and was a no-show. Mark, who can be very persuasive, talked Rosemary into taking her place. It poured rain all day. There was a river running across the No Name straight. While most everyone (probably including me) tip-toed around, Mark had Rosemary close to 115 on the main straight and 80 on No Name (“keep your foot down and the wheel straight”). She loved it. Signed up for Watkins Glen, Mark wasn’t there, she hated it, done. Oh well. 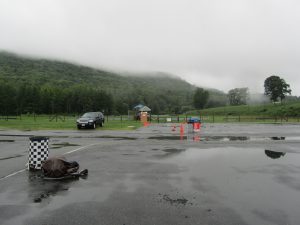 But in the “what goes around” mode I am now again in regular contact with Mark (who lives in Texas). The JB team now has an E36 which we are preparing for endurance racing, and Mark still has his similar E36, is a regular competitor in WRL endurance races and has been providing invaluable insight into how to set up our car. 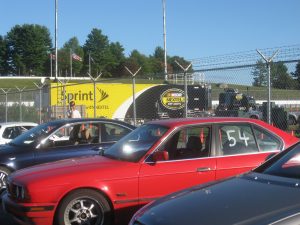 The second DE tale centers on my daughter’s first DE, just days after her 18th birthday, in one of the first outings for the Cayman. Nora was, of course, a green student, and I was in yellow/blue. Also at the event were Steve Schindler and his son Dennis who was a couple of years older than Nora. Steve and Dennis, who were also in yellow/blue and green respectively, were sharing a Boxster. At some point, Nora asked me if the Schindler’s car was faster than ours. I reflected that our newer base Cayman was probably darn close to their older Boxster S and that Steve and I were doing about the same lap times (and boy, do I wish I could still say the same!). This was apparently taken to heart because when Dennis appeared in Nora’s mirror (easy to spot with the Vermont plate), and she was advised to give him a point-by, by her instructor, she declined. 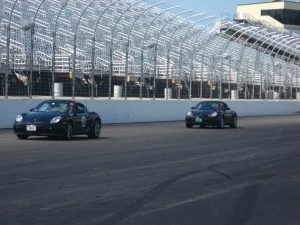 Most instructors would have told her to drive into the pits, but this instructor (not Mark but one of the best!), knew his student and her car and let her continue. With attention half on the mirror, Nora didn’t get much farther before PSM saved her bacon; she came to her senses and let him by. Lesson well taught and duly learned. The event did no damage to the relationship with the Schindlers:  at a later Mt. Tremblant event, Steve’s wife Mary befriended Nora, and Nora left our B&B in favor of camping at the track with the Schindlers.