Many years ago the Porsche club in New England used to run time trials up in New Hampshire on the ice in the wintertime. A favorite spot was Newfound Lake in Bristol, NH. A course would be set out using as few pylons as possible and timing was done from a bob house (think fishing shack) with a large plastic window looking out over the course. It was one car at a time like an autocross, just colder and slower. Most folks just ran their winter beater with snow tires but all were welcome. After PCA national stopped providing insurance for the event, the Boston Chapter of the BMW Club stepped in and continued the winter fun. That went on for many years until lake access became a problem (too much building around the lake). There were always events in upstate NY and in Canada but that always seemed like too far to go for just a few runs. I think my phone heard me talking about ice racing because a Facebook alert popped up that highlighted the Sports Car Club of Vermont (SCCV) and their ice race schedule near Montpelier, VT. That’s only a 3 hour drive north and with an empty calendar it seemed like a good idea.  Besides, Pearl, the Audi RS4 had a new engine installed and could use some road  miles. The extra 200 hp boost wouldn’t be needed on the lake but the ride up would be fun.

I called my friend Jeff Leeds who had also spent some time on the ice years ago and he was up for it so we motored up on a Friday afternoon for a Saturday event. Finding a great steakhouse in Montpelier VT gave us another incentive to go. The Open Table app had found the J Morgan Steakhouse (I don’t know what happened to the P) and the food was terrific.  If we didn’t drive well at least we’d had a nice dinner.

Registration was online at Motorsportreg.com which made the process very easy. Drivers meeting was at 9am with the first run to start at 10 am which gave us time for the free breakfast at the Comfort Inn. While we didn’t see any other drivers eating that were headed to the lake, there was a big crowd that came for the free food.

We had both packed pretty much all the warm clothes we owned as the forecast was for a cold sunny day. It had been cold in Boston most of the previous week so that was no surprise. What was a surprise was the morning temperature in VT. I went out to start the car and the reading in the car was 20 below zero. That car had never seen a number that low, nor had I,  and it was going to get lower.   Elmore Lake was about 30 miles north of the capital and we had to have been 10 miles out of town before the heater started to put out any serious heat. By that point the temperatures in some of the low spots had driven the gauge down to minus 27 degrees.

When we arrived at the site they were lining up in a nearby parking lot that looked out over the lake. To get onto the ice another waiver needed to be signed, something to relieve the local town of any liability if you and your car fell into the water. There wasn’t much chance of that happening as the drilled surface had already been measured at 18”, more than enough to support all of us. Everyone lined up for a low speed familiarization run and the cars were all lined up in a plowed pit area afterward. That gave us a chance to get out of the car and walk around to see the what was running that day. 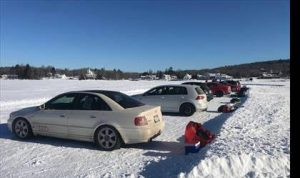 There were some real dedicated ice racers there with tire spikes so long they couldn’t be used on pavement. Fortunately they were in a Super Stud class which was even faster that the regular Studded Class. Pearl was just on a set of 5 year old Bridgestone Blizzacks without studs. Good on the street but a little old and hard to be really competitive in this kind of contest. Can you hear those slow time excuses yet?

Since these drivers were mostly from VT and upstate New York, I’d say that most had studs of some type. After all, their roads stay snow covered for 5 or 6 months of the year. 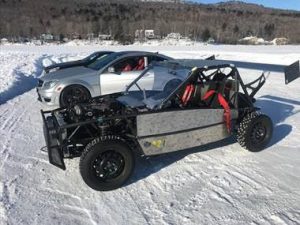 The course and the parking/pit area were plowed out (see white truck above) which made the course easy to follow. There were only about 5 pylons on the entire course as nobody wanted to stand out there picking cones.  It was an easy course to see but not so easy to stay on if you were throwing your car around at maximum speed. The plow had  left a berm that was about 5” high but there were a few spots where it was deeper. Deep enough to high center a car that required a tow from the plow. High center means that the center of the car is  stuck on a mound of snow and ice and the wheels aren’t really touching the ground. No touch, no traction, studs or not, you’re stuck. 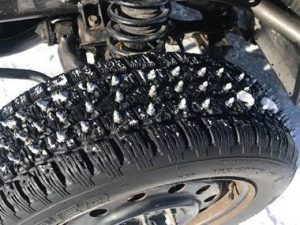 Jeff and I really didn’t want to be “that guy” so we were careful not to run off course. Of course that meant that we had to drive a little slower but it still seemed fast to us. See excuses, above.  Early in the day there was plenty of hard packed snow on top of the ice to get a decent grip. As the day wore on there were a few spots that were polished by spinning wheels that revealed black ice. Black ice is something you can’t stand up straight on, let alone drive on. The secret is a steady throttle and no sudden steering moves to allow the car to just roll over it. The key to a fast run is to find the white stuff and stay on it.

Pearl made us proud and I even had a chance to use the loud button on the last run on the ice. I didn’t use it during the day because they had a 90db sound limit and after all that driving to get there I didn’t want to get tossed off the lake early . They loved it, like they say at the track: “we may not be fast but we’re loud”.  Oh wait, that was my High School Band and it was good, not fast.

It was a great time, nice people, a well-run event and a mid class finish for us.  With darkness falling the event finished up early and we were on the road by 4. That left time for a nice dinner on the way home. A great car weekend in the middle of winter. What’s not to like? Well, maybe it might be closer to zero next time, we could spend more time out of the car.

As a reward for great service Pearl got a new outfit for Spring using my shelf paper method. For old timers, that’s a Datsun stripe, my thanks to Bob Sharp.

Can summer be far away?