What is the Northeast Region’s Annual Spring Ramble?

There are a number of ways to answer this question.  One could start by saying that it’s the largest single event run by NER, and one of the largest regional events in PCA.  You could also simply say it’s the very best way to start the driving season!  But is it a driving event or a social one?  Frankly, it’s a delightful combination of both with good friends, good food and a weekend at a top-notch resort .  Most attendees arrive Friday to begin their social and partying activities before the serious driving commences on Saturday morning. 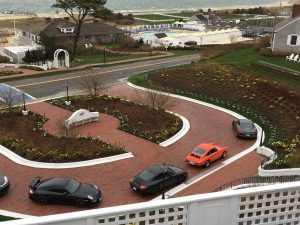 While many Ramblers have been enjoying this event for 10, 20, and a few for 30 years, each year our ranks swell by 40-50 first-timers.  The passion for the event is underscored by the fact that generally get over 100 registrations within days of registration opening in mid-January.  And during the course of the weekend, you’ll see many people sporting commemorative Ramble pins that uniquely represent each year’s event.

The New England Ramble has traveled a long way from a Saturday drive for about 20 Porsches way back in 1985.   That first Ramble was hosted at the Queechee Inn, an historic Vermont country inn with 24 rooms.  As the event has grown in size and length, we’ve visited lovely resorts in Massachusetts, Maine, New Hampshire, Vermont, and New York.  We’ve outgrown properties like The Red Lion Inn, The Wolfeboro Inn, Cranwell, The Woodstock Inn, The Black Point Inn, and The Wequasset Inn.  That said, we’ve found new locations like Cliff House Maine and the Chatham Bars Inn to join old favorites like The Equinox, The Sagamore Inn, The Samoset Resort, The Otesaga Resort, and the Omni Mt. Washington,.

When the event starts, everyone registers, enjoys continental breakfast, and then attends the mandatory drivers and passengers safety and route briefing, after which drivers hit the road.

Approximately 3 hours of enjoyable motoring along scenic highways and byways ends at our buffet lunch location.  After some time to refuel and refresh both bodies and minds, and comparing notes about the morning drive with other participants, people embark from our lunch stop on another roughly 3 hour jaunt along lovely, serpentine roads.  Attendees also have the option to return to our host hotel sooner to begin partying, get a massage, hike, shop, or whatever, by simply taking the more direct route that is also provided.

Given all the time that’s spent on the route planning, I hate to say it, but there are some people who don’t drive the route at all.  They’ve come to enjoy a getaway at a lovely resort with their Ramble friends.  Others just partake of the morning tour, and tarry around their lunch table chatting with new and old friends. Frankly, it warms my heart to see so many old and budding friendships occurring before my eyes.  I think of it as a family reunion, but this extended family doesn’t require a blood relationship for inclusion. 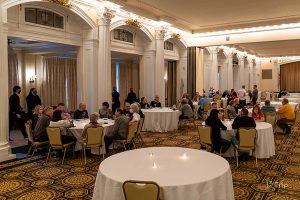 Saturday evening we meet for cocktails and hors d’oeuvres, followed by a plated dinner, and more socializing during and after the meal.  With so many attendees, we pretty much take over the property, so many people just walk up to people and start talking.  And for the few non-PCA’ers around, perhaps they’ll get the urge to buy a Porsche so they can become a Rambler themselves.

Sunday morning typically offers up a full, hot, buffet breakfast, after which people are on their own again to head home, or stay longer and enjoy the charms of that year’s scenic locale.  For several years now we’ve had 40+ people start their Ramblin’ on Thursday, and we’ve also begun to see a dozen or more people staying over Sunday night to stretch out their enjoyment. 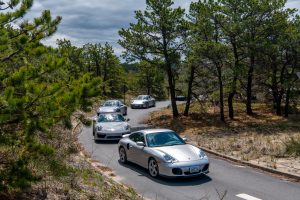 Our region offers lots of ways to enjoy your Porsche.  The Ramble is a navigational, directions-based tour that is designed to be enjoyed while driving at the posted speed limit.  We insist that everyone follows all the laws and regulations pertaining to the public roadways we’ll be traveling.  We traverse many narrow, 2-lane roads, and need to give pedestrians and bicyclers a wide berth.  If someone has the urge to exercise their Porsche more energetically, we highly recommend attending one of the many Driver’s Education or Autocross events hosted by the Northeast Region as imprudent or dangerous driving behavior is not  tolerated during the Ramble.

Let me share an anecdote.  My wife and I took over chairing this wonderful event in 2017, and had more than a little apprehension about meeting attendee’s and NER’s expectations upon taking over from Bruce Hauben who had served as the Ramblemeister for 15 years.  To add to my stress level, Greg Halverson had flown in from National to check out how we ran the event.  Upon arriving at the Saratoga Auto Museum for lunch, several people came up to me and inquired if I knew why a couple of Porsches had been pulled over by a State Trooper.  My heart sank as I had visions of living in infamy as the guy who screwed up the Ramble.  As each new group arrived, I anxiously inquired about the incident.  Finally the alleged offenders arrived, and shared the following story.  Apparently, a group of Corvettes had been “terrorizing” the sleepy hamlets on a part of our tour the past 2 weekends, so the Staties were out in force.  The 2 Porsches who were pulled over didn’t know what they had done since they were rambling along in the middle of 8 or 9 other cars who had not been detained.  When they rolled down their windows, the State Trooper explained that after seeing 100 Porsches drive courteously by, he was wondering what was going on!  I suppose it’s “no harm, no foul”, but it didn’t do my digestion any good until I heard the explanation.

As an indication of people’s attachment to the event, just after Labor Day, I typically start getting an email or two every week or so asking when registration will open.  We’re all looking forward to sharing another memorable weekend of Porsche-worthy roads with good friends, and enjoying good food and drinks together.  Perhaps you’ve heard – It’s all about the people! - Dennis Friedman, NER Ramble Chair