On August 1st, 200+ of your fellow club members, friends, and family came out to Wachusett Mountain for our 4th annual NER PCA summer party. We could not have asked for better weather; it was the perfect summer afternoon to enjoy a ride on the ski lift up to the summit, chill by the band, have a tasty BBQ lunch, check out the robotics demo, and mosey through the car show. 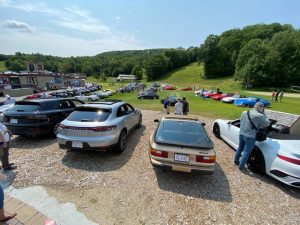 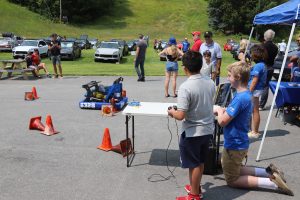 The lawn was filled with Porsches of all shapes, sizes, and colors, and our sponsor Porsche Norwell came through, as they always do, with a wide-ranging display of models from a gorgeous 1976 930 Turbo, a Taycan, and a paint-to-sample Arrow Blue Cayman GT4. Attendees voted on their favorite cars (or SUVs), and we’re proud to report the following winners in each class: 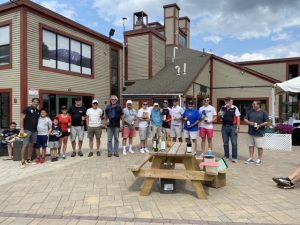 Turning our attention to Cornhole Corner, we received a special report from our local correspondent, Bill Seymour:

There was plenty of sports excitement in the ever-unpopular Cornhole Contest. A thin field of only seven two-person teams entered for the Qualifying round. The pre-race favorite team “1920-1983” (ask Luis how he came up with that name as I have no idea) faltered badly, and “1983 Targa” (Brian Leonard and Tony O’Toole) also failed to get out of Quali. Two teams tied with 15 points and were set to have a “play-in” – “LOL - PDK” (Mike Cioffi and Andrew Quinn – both of Porsche Norwell) and High Fructose (Owen and Mitchell Coonahan) when it was determined that two of the qualifiers were not in attendance. 90% of success is showing up. (OK, maybe the event organizers didn’t do a good job of communicating exactly when the finals would take place.) >>>So that's how he weaseled his way into the finals. I went on a ski lift ride with my girlfriend and came back to a smirking Bill Seymour who ended up "winning the tournament" Am I salty? Yes, a little bit. Will I come back next year with a vengeance? - you better believe it, but next year it's me against you, Bill - the rivalry remains  (Luis).

In any event, that bid adieu to Tequila Takillya (I hope I’m spelling that right, but the players were Rob Stanley and Nikki Sanders) and “Need A Partner” (Tim Coonahan and Jay Landry – the latter being the Parts Manager at Porsche Norwell). The top qualifier, “Electrons” (Michael Cardinale and Cyril Bernard) did make the start line. Lacking a fourth team to fill out the grid, a new team consisting of Brian Leonard (another Porsche Norwell) and Bill Seymour was formed as “The Replacements.”

In the semi’s “Electrons” squared off against “LOL – PDK” and played a heroic match that took forever because they invoked the rule that you had to hit 21 points exactly (going over puts you back at 11, according to this format). (Let the record show that the NER PCA Cornhole rulebook follows the more standard format as published here. “Electrons” lost and could have filed an appeal but did not do so in time.) In the other semi “High Fructose” jumped to a 16-1 lead, but then the beer kicked in, and “The Replacements” roared back to win. “The Replacements” stayed hot in the Finals and won. A good time was had by some, and the organizers are questioning whether next year this event should be replaced by Beer Pong. 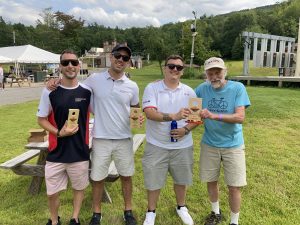 Thanks to the tireless efforts of our membership chair and sim racing enthusiast Anker Berg-Sonne, as well as fellow members of the NER PCA facebook community who jumped in to help, guests had the chance to experience a full complement of sim racing technology. Two Sim Rigs were available to try for participants of every age. Both simulators were run at Lime Rock Park and solo practice with the Skip Barber Formula 2000. One was the loaner Sim Racing rig that is available to PCA members in the local region, and the other was generously provided by Erick Aubin and Cyril Bernard. For the adventurous and motion-sick resistant, we also had a VR headset to try out. Testers ranged in age from four to the ’80s. The youngest, a young lady aged four, impressed everyone by staying on track lap after lap. She did need help with accelerator and brake pedals; they were far out of reach for her. Since the Summer Party, the loaner rig has been upgraded and is now a full rig with a racing seat and a solid frame. It is easily disassembled and can be transported in a family car. Interested members can contact our Membership Chair, Anker Berg-Sonne, through email at membership@porschenet.com to arrange a loan. You will need to use your own PC that must be able to support iRacing. To test your PC for compatibility, go to http://www.systemrequirementslab.com/Client/iRacing/?apikey=dec37c7f-8819-45d4-94f2-f33cf0956712 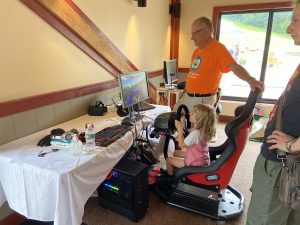 At the end of the day, when things were winding down and cars were being packed up with the various supplies used throughout the event, I sat down to have a drink with the amazing volunteers that really made this event possible with their incredibly hard work. I can’t give enough thanks to this crew – you know who you are and you are very much appreciated!

They say a picture is worth a thousand words, so I will leave you with the photos and memories captured throughout the day by party-goers. Their thousand words tell a much better story than I possibly could.