Anker Berge-Sonne’s recent story regarding how he first learned to drive and eventually got his license got me to thinking. In some ways my experience is similar and yet certainly different. I was born way back in late November 1949… so not very long after World War II.

We lived in a nice 3 bedroom house in Johnston, RI. My folks had bought that house with the money they had saved up after my father (a licensed electrician) worked MANY long hours after the Hurricane of 38 pretty much devastated a lot of downtown Providence. My dad worked at the US Rubber plant (later called Uniroyal) and the plant sat right alongside the Woonasquatucket River. When the Hurricane blew up the east coast the storm serge was about 12 feet in the city. There are still markers on some of the downtown buildings showing how high the water rose. 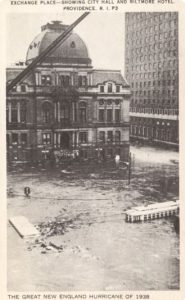 With the US Rubber plant being right along the river… the water came up fast and pretty much took out the manufacturing capacity on ALL of the first floor buildings. For almost a year my dad worked from sun up to sun down, 6 and 7 days a week …repairing the damage. LOTS of overtime… and thus the money to eventually buy a house. One smart purchase my family made was to buy the extra lot next to our house. The lot was maybe 120 feet long and about 60 feet wide. This lot will soon be part of the story.

Cars (and motorcycles) were always a big part of my dad’s interest… and as a boy I would watch him (and help) as he worked either on his bike or his cars. “Hand me that 7/16-inch box wrench” …
“Ok… what’s a box wrench?”. I learned by doing. 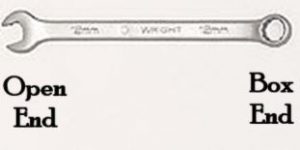 Dad followed racing…. Indy, Daytona, anything local like midgets and stock cars at Seekonk and Thompson. In fact, one of my early memories was going to Thompson (I was maybe 11 or 12) on the back of the Harley and ending up near the paddock of the second configuration of that track. We watched real “road racing” and I remember the Ferrari of Mike Gamino (of Providence) go head-to-head with a Jag and an early Corvette. I’m pretty sure this was an SCCA event and I think the Ferrari won.

So, about this time I am in my early teens and the “car bug” had bit. I wanted to learn to drive. We had a Hudson Hornet (anybody remember those beasts ??) that was “surplus to our needs” and was not registered. It sat in that extra lot. Eventually my mom gave me the keys and encouraged me to “drive it back and forth” in the lot. I did this for hours on end. Back and forth… back and forth. (note: I had never heard of the Hudson Hornet prior to posting this article - here is an example of Steve McQueen's I found online - Luis) 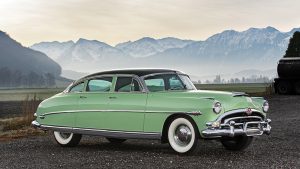 My mom giving me encouragement will come into play in a moment.

After about a year of this (I think I was maybe 15) one day my mom leaves the house while a friend of mine was with me. I get the bright idea to take the Hudson out on the side roads for a little run. Remember this is suburbia… there are houses and people and other cars all around… we are NOT out in the country. My buddy and I are gone no more than 10 minutes…during which time I ALMOST crashed the car. As I am driving back into the yard… I realize my mom is HOME.

@$%&.. caught red handed. Mom has one comment. “Wait till your father gets home and hears about this!” How many times have we ALL heard that expression?

Well, I did not get smacked across the back of my head, but I did get a STERN talking to by my father. Needless to say, … I never took the Hudson out on the road again.

My mother basically taught me how to drive. She had a 64 Dodge Dart convertible with a small V-8 and automatic transmission. I got my learners permit and together we would go out and drive around and she would instruct me. But since I had spent so much time in the Hudson… there really was not a lot to lean.

In high school I went to LaSalle Academy in Providence, an all-boy’s Catholic school… rather strict. I was a sophomore when I turned 16. I took a day out of school and my mother takes me to the driving test. I had one demerit (did not turn on my flashers when pulling out of the slot at the beginning of the test) and passed with flying colors. We got my paper work and Mom takes me to the registry and I get my license. All in the same day.

So, the next morning … as I’m getting ready for school… I ask my mother for a “note” to give to the teacher… saying I was sick yesterday. My mother looks at me and says “you were not sick… I am not giving you a note”. “But mom” I protest… “I’ll get in trouble.” “Well, you should have thought of that beforehand”. Needless to say, I did NOT get a note!

At school, after the first class session, there is an announcement over the PA system. “Mr. Raymond Boyer, please come to the principal’s office”. Now you have to understand that up to this point I had NEVER missed a day of school at LaSalle.

I walk into the office and there is Brother Patrick… the principal. (I will have another run in with this authority figure later in the year… a story for another time).

“Mr. Boyer, you were not in school yesterday. What is your excuse. Do you have a note from home?”

“Why not, you missed school yesterday?”

I paused before I answered, considering my options.
Finally, I just fessed up.

“Well Brother, yesterday was my birthday and I turned 16. I took the day off and my mother drove me to take the driving test, which I passed I might add. After that we went to the Registry and I filled out the paperwork and I got my license. Then my mother took me out for lunch to celebrate me getting my license.”

This is all BS… but hey… I might as well spin this yarn as far as I can and see what happens. In a final act of defiance, rather proudly I say …

Brother Patrick looks at me with a bit of shock and perhaps with just a bit of incredulity. He just stands there looking at me. It seemed like forever, but was probably no more that 10 seconds before he says.

“Thank you, Brother,” I reply.

I figure I am home free. Patrick just stands there thinking, perhaps for another 5 seconds. Then the verdict comes down.

“Three Weeks Detention. Report to room 102 every day after class.”

So, for the next 3 weeks I go to room 102 after class and spend those 45 minutes each day with all the other “hooligans” of La Salle Academy.

But at least after detention I got to drive myself home. You see, my dad gave me that old Hudson Hornet as a birthday present.

Ray Boyer is a newer member of the Porsche community. He bought his first P car (a 2011 Carrera 911) in August of 2019 as a present to himself for his 70th. birthday. Raymond joined the New England Porsche club in January of 2021. He is also a member of the SCCA and has been racing Formula Fords for more than 30 years. He does most of the mechanical work on the car himself. He now knows the difference between a 7/16-inch box wrench and a screwdriver.