What’s your name and where do you reside?

Stan Corbett, My wife, Carie, and I live in N.Grafton

While still in the service, in Omaha NE, Stan was in a Hemi Club and had a 426 Road Runner.

“...We would run gymkhanas and one guy brought a 911, which I thought was cool, until I met the wrong group of 911 owners who had their nose in the stratosphere. I wrote them off until I had a friend who had a Boxster and we went up to NHMS a couple times. We went to Mosport and while we were up there, I did a bunch of parade laps each day. On the way back I said, This is too much fun not to be involved in. So I called him later that day and I had my Cayman at the end of that week... I put it on the track later that month at NHMS. I traded in my Dakota and the Cayman was my daily driver for 2.5 years. I bought a set of rims with Blizzaks and that's what I drove in the winter.” From that moment, Stan has done almost every NER and NCR DE event every year and got 25-30 days per year since then. 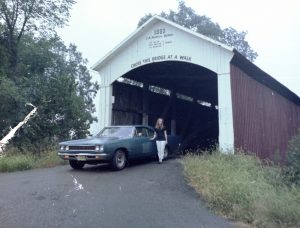 What’s your history with PCA and New England?

“Since I bought it (the Cayman) I have been in PCA. I flagged at NHMS and worked control at Mosport before I joined because I was with my friend (the Boxster owner). Steve Artick let me in my first event (at NHMS) and was my instructor. I was going to the track so much my wife let me get a tire trailer and then an open trailer and tow vehicle. For several years I towed it with a Dodge pickup which I traded for an 06 Cayenne S. It had headlight issues and I swapped it for a 09 Cayenne S… I was picking up parts from the folks I bought it from and they had a 2013 Cayenne Diesel. The owner showed it to me (I knew it would tow better) and then he said “I’ll sell you that one.” “SOLD”...when not towing I get over 30MPG.”

I used to drag race a 69 Hemi Roadrunner in Nebraska and if it wasn't for my buddy with the Boxster, I would have never bought a Porsche.”

“The Cayenne is my daily driver. The Cayman is on quick jacks. At the last Palmer event, 3rd gear took a vacation, the rev counter climbed and now it’s broken. The transmission will come out, Kevin Gross will pull it apart and see what's going on (Kevin is a NER and Zone 1 Instructor)” 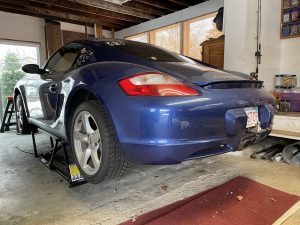 Favorite: “It used to be sticky snow so you could make snowballs and snowmen, but not so wet you couldn't ski. I gave up downhill skiing a long time ago but then did cross country for a few years.”

What are the best and worst cars you’ve driven in the snow?

Worst: Hemi with slicks in Nebraska. If you went up a hill you had to time it….(YIKES)

Any words of encouragement for members who don’t drive their Porsches in the winter?

“I drove the Cayman as a Daily for 2.5-3 years. Buy a set of honest to goodness snow tires and exercise a reasonable amount of common sense.” - Words to live by. Listen to Stan, and enjoy your Winter, folks!

If you would like to share your Porsche winter driving experience with our NER crew, please email Luis at Communications@porschenet.com !