My loyal supporters will recall that I have lost a few readers upon discussing my position on noise, specifically engine noise. To set the stage for this latest discussion, let me remind everyone how this started, and then a decision can be made as to whether or not reading any further will be time well spent.

My first motor vehicle was a Lambretta motor scooter with a 125 cc two-cycle engine. Think, Putt, Putt, Putt. The year purchased, it had been used at Sebring as a communication link between corner stations at the track that we still race on. Since it burned a mixture of gas and oil (one Coke Bottle full of oil for every tank of gas) and had a muffler bigger than the gas tank, it was very quiet. The perfect vehicle for delivering the Orlando Sentinel early in the morning.  Not so perfect trying to be part of the biker crowd in rural Kissimmee, FL. In short order, I had two short pieces of plumbers pipe welded into the side of the muffler and plugged them with a screw-in metal cap. The first cutout on the street. Once the paper route was done and everyone was awake, the plugs came out, and the little scooter spoke with some authority. Not a lot, but some.

Next up was a '58 VW beetle with a stock muffler. The second day I had it, another VW owner showed me how to take off the two chrome exhaust pipes, remove the fiberglass (probably asbestos) packing inside the pipe and make the 36hp engine sound like it had a lot more muscle. Like maybe 40hp. This was before any kind of nonstock exhaust was available. Extractor exhausts were still ten years away from the speed shops on the left coast. A couple of years into beetle ownership, the weld broke on the #4 exhaust pipe, and the one after the clamp had been loosened on the #3 pipe, the muffler could be pulled out just a little and it sounded like another ten hp appeared. Of course, it didn't, but it sounded better

A  Porsche 356 was the next car I owned, and it came to me with an Abarth exhaust with four small chrome pipes coming out from under the rear bumper. That was perfect; no modification needed, nice deep exhaust tone, and very long-lasting.

The 356 was getting expensive to service, and I needed a reliable ride for the last two years of college, so a Volvo 544 was the replacement. It had two mufflers, actually, one resonator in the center sitting longways and one muffler in the rear sitting crossways. Once the rear piece was removed and a straight pipe installed, it wasn't that much louder, but it had a terrific growl to it when it was downshifted to a lower gear to slow down, just like a '49 Flathead Ford coming down a grade in second gear.

There were lots of others. Once extractor exhausts were available, I had them on 356's, 914's, and even early 911s. Audis, like that old Volvo, always had more mufflers than I thought they needed, so more straight pipes were used. A  later Volvo 142 even got its system shortened to a side exhaust that dumped out in front of the rear wheel. On the driver's side, of course.  Are we starting to see a pattern here?

There is only one car sitting in the garage with a stock exhaust system, and that is a Macan that I don't drive and am not allowed to fool with.

The Speedster has a Sebring exhaust 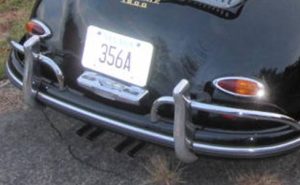 The Puddle Jumper has an original Abarth muffler 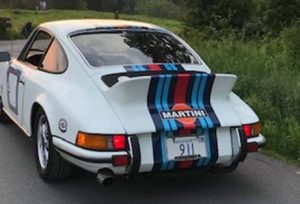 The '85 BMW has a stainless steel exhaust that Rick's Custom built for me years ago that makes great noises, and Pearl, the Audi RS4, also benefited from Ricks's handiwork before he retired with the installation of an electric cutout that can be opened at the touch of a button.  Even without the cutout, it is short a resonator that says it's not your Grandfather's Audi.

As the years rolled along, even the Porsche Factory got into the act. The current Big Dog in the garage (2015 991 Turbo S) has a system that changes tone with the touch of a switch, and it's not quieter. The C4S that my son, Rob, loaned me for a while to inspire the Turbo S purchase has a Factory loud button as an option. Looking at the system, it is an electric cutout that redirects the exhaust to bypass two of the three mufflers. We both agreed that was a good start, but we have replaced the rear muffler on both cars to provide a little more character.

Once the Turbo S and the C4S were tested at the track, and both passed the noise limit, that prompted me to take a look at what was on the books in the US that limited the noise on streetcars.

These are actually some pretty big numbers when you consider that the race noise limit at Lime Rock Park is 86db, and those are some loud cars. Of the New  England states, only RI has a measured limit, while others like MA and NH say things like "every motor vehicle shall be provided with a muffler or other suitable device to prevent unnecessary noise."  I'm not sure what necessary noise really is, but it certainly doesn't come with electric cars, which is probably why I can't see owning one. NH has a rather strange rule that states "no person shall operate a motor vehicle with a straight pipe exhaust system," whatever that is. Maybe that was written back in the '50s when "Lakes pipes" were popular out west or more recently to address Corvette side pipes.  I did see a set of straight pipes on a Porsche when John Ames fashioned an exhaust system using a set of copper pipes on his Speedster when we were at Univ of MD back in the '60s. As I recall, they didn't last long as the brazed joints couldn't take the exhaust heat. I'll never forget the look of four pipes sticking out the back of that Tub flying up University Blvd on the way to class. Funny that snapshots of life never seem to go away.

I really like the VT statute that only states: "A motor vehicle, operated on any highway shall be in good mechanical condition and shall be properly equipped." MA law is as general as any as it uses the: "prevent unnecessary noise" line. It also goes on to say that motor vehicles need a bell or horn for signaling and a lock, key, or another device to prevent unauthorized use. That sounds like it could've been written back when quill pens were in use.

There are 18 states that prohibit the use of "cutouts," but only four states say that cars cannot have them mounted in the car. Those would be CA, NY, ME, and IL. Since MA is one of the states that only says that you can't use it, I guess Pearl is in the clear as long as I don't hit the switch. In case you are wondering if there are any states that really don't care, there is one. That would be Alaska, where there are no state laws that address exhaust noise; they are regulated locally.

The research I did above prompted me to look at noise limits at some of the racetracks that I have run on in the past.

The track in NH where NASCAR runs, NHIS, really doesn't have a noise limit. That seems reasonable as it is still out in the woods, and the deer don't care. Civilization hasn't gotten close enough to complain yet, but I'm sure that will happen. Another track with no noise restrictions is Watkins Glen. High above the town of Watkins Glen, I suppose that the residents are just glad to have folks stop by to spend a few bucks. There are a couple of sanctioning groups that do impose a limit, but those numbers are in the 102-105 range. Think jet plane takeoff volume as you're standing on the runway.

Sebring is another race track without any concerns about noise. Another reason why I really like the world's longest autocross track.

Speaking about autocrosses, we do have a sound limit when we run at Ft Devens. It is a little strange as it is set as a number over the ambient noise level. The rule says cars on the course cannot make more than 10db over the noise level when there is no noise. Of course, there is never "no noise." I have a dB meter app on my phone (of course, doesn't everyone?), and sitting in my office writing it tells me that the sound level is about 55db, and it's quiet in here. That is about what it reads out on the runway at Ft Devens unless the wind is blowing, and then it can easily bounce up to 75-80db. Add a car out on the main road, and the meter will show 80-85. Take the reading far enough away from the course when a car goes past, and it adds less than 10db. It's safe to say that a 90db limit is about right there. I don't know that we have ever asked anyone to leave the event because their car was too loud.

So, I conclude that noise is good. Even the stickers on the rear of a couple of my cars back that up, "Loud Pipes Save Lives."