With the Mustang a no-go for the series we want to race in (American Endurance Racing and Champ Car), the Jamaican Bakin’ team bought an E36 BMW M3 race car as a replacement. The car was a successful BMW Club racer that was built out with the correct aftermarket parts. We took it out to the last Thompson member day for a trial, and it worked great – easy to drive, ran fine, good to go, nothing needed before next season, right? Well, no. Of course, there are a few things that need to be done – perhaps a day or two of work? 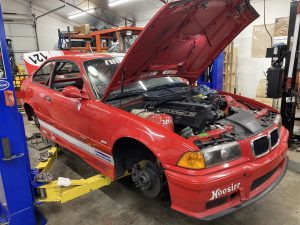 Let’s start with the obvious. To run successfully, we need to be able to go 90 minutes between stops. The stock fuel tank holds 17 gallons (perhaps 16 useful before it starves on corners) – not quite enough. So a pony tank will need to be installed in the spare tire wheel well. With a fuel pump to pump from the pony to the stock tank. With wiring, switches, etc. And while we are at it, we might as well replace the fuel lines, just to be safe. But with a pony tank in the trunk area, we now need to fabricate a firewall to separate that from the driver compartment.

We also need to move over the endurance racing stuff from the Mustang to the new ride. The cool-suit system and the telemetry system (don’t forget the antenna mounting) require some brackets to be fabricated and a fuse box added to deal with the additional electrical demands. Oh, and since we are messing with wires, we might as well take out some of the unnecessary original wiring and clean that up. Oh, and don’t forget the rain light (noting that AER mandates one type and Champ Car requires a different one.) Or the flagging system device and its wiring.

We were all reasonably comfortable doing short stints when we had the car at Thompson, but for long stints, the seating position wasn’t great for all of us. So we need a new seat which will require fabricating new brackets for the slider and the back brace. (Poor Chip is the one with the machine shop and thus gets more than his share of assignments.) And the steering wheel angle and location suited the previous owner but not us, so a little work to move the wheel down and away from the driver. Piece of cake! Plus, the mirror is too far back and needs to be moved.

The belts that came with the car are OK and have another year left, but the ones in the Mustang are better, so let’s swap those out. And, yes, there is a center net, but we don’t like the way it is fastened, so that will require some work. And the door net is a bit weird, so it will require some attention. While we are at it, for safety sake, let’s replace the original interior door handles with cables that are easier to find and pull in an emergency. Finally, on the safety side, the fire system is out of date and needs to be refreshed.

Oh, yeah. As an endurance car, we need to add a differential cooler (which needs to be powered plus a temperature sensor added - see wiring comments above), and it needs a NACA duct to draw in air. The easy solution is to replace the rear windows with Lexan and put in the duct – it lightens the car too! – and we need another duct to bring in cool air for the cool system anyway! And don’t forget that we need to do something to defrost the windshield since we might be doing long stints in bad weather. 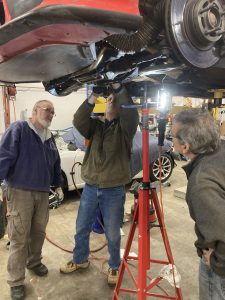 While the car came to us as described, there were a couple of small problems. There was a crack in the windshield and a battery tie-down that would not get past an AER tech (but apparently got past BMW club racing). But, hey, we need a lighter battery anyway, so Chip has one more thing to fabricate. And there is a slight tear in the left ball joint boot. Now that we think about that, maybe there is a suspension upgrade that would require new front control arms anyway – we’ll look into that. And the clutch works fine but takes up very close to the floor. It would be more aesthetic with a higher catch point. And anyway, we should flush the system. Never mind, let’s just preemptively replace the clutch slave cylinder – it’s probably pretty old.

Let’s move on to the wear parts that could fail. Might as well do those now rather than just stockpile parts and wait for something bad to happen at a race! (Since I’m a lousy wrench, I get assigned to source the parts – made harder by my lack of knowledge, age of the car, and uncertainty of which are stock and which race aftermarket.) I’m looking at your bearings and half shafts! And perhaps the solid motor and transmission mounts are too stiff for the wear and tear of endurance racing? Let’s research and debate whether to go with OEM or poly. OK, poly it is.

OK, now we are almost ready to go racing. My final job (note the skill involved) is to remove the old number panels, work hours with acetone to get all the glue off, and then put on the shiny new “420” number panels and Jamaican Bakin’ Racing decals. Vroom. Vroom. Let’s hope we are ready. 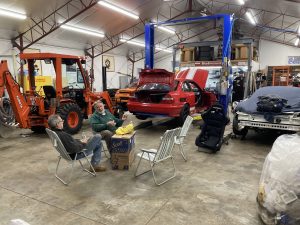 P.S. One nice benefit of working on the E36 is that we have been reaching out to old NER friend Mark Schnoerr for advice. He and Sigrid send their regards from Texas.