As many of my loyal readers know, this column tends to pass along stories that are upbeat; at least, that is my intent. Since I'm the writer I realize that I tend to also post tales that make me look good. Sometimes that is tough to do because I make some of the same mistakes that everyone else does. When an axle nut didn't get tightened correctly, and the rear wheel came off the Speedster on the way home from an autocross, I just didn't mention that in my next column. But when I want to change the oil in a C4S and save $450 off the dealer's price, the description goes on forever. The underlying thread is that I'm a genius. Of course, we all know that isn't true.

I am the first to complain about the media and the biased reporting that we are all subjected to every day. I know that Walter Cronkite died years ago, and with him, the news reporting that I grew up with. A news story reported today could sound like two different events depending upon what station you are watching. No wonder the generation behind me doesn't watch TV news. In the interest of full disclosure,  this month's column will have some bad news in it. The good news is that I'm OK.

The race season is finally at full speed, and my first race was at Watkins Glen last month. It was an AER race, a two-day enduro that ran 8 hrs one day and 6 hrs the next. The cars were provided by Matt Connelly Motorsports. BMW 330's that I have driven in the past. Terrific cars that can pretty much pass anything on the track at will.

My co-driver, Rob, couldn't make the trip, but I went up a couple of days early to get in some practice. The weather wasn't great, but the ride out was great fun in the newest garage resident, a 2015 Turbo S.   I even had time to look around The Glen a bit and see some of the local attractions. 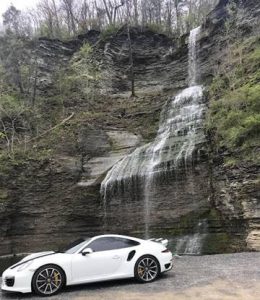 Practice started with a wet track, but the car stuck pretty well even if the lap times weren't that good. Matt brought two similar cars, and they were set up exactly the same. We had four drivers for each car, and everyone took a turn as the track began to dry out. My morning time was the slowest in the group, so I had to get serious in the afternoon; besides, I like driving in the rain. There is a nice data screen on the dash that shows the projected lap time as the course is being driven. If you brake too early or don't carry enough speed through a turn, the projected lap time will be increased. In the same way, if you do the corner just right or hit the brakes later, the time on the screen will begin to fall. On my last practice lap, the racing line was finally dry, and my times were starting to fall, so I was determined to finish strong. 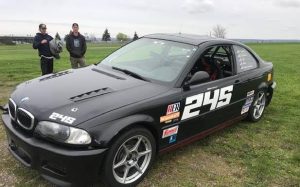 With only two turns left and the timer looking good, I drove into turn ten flat out in 4th gear. Carrying just a bit more speed than the dry line could hold, I dropped two wheels onto the wet portion of the pavement and began to lose even more traction.  I have spun in turn ten before and always caught it, but this time was different. I remember thinking, keep my foot down, don't lift, steer in the direction of the skid, you got this. But I didn't.  The back of the car snapped around before I could react, and I was headed to the inside guard rail. I did get both feet down before impact, but it was close. The good news was that because this turn saw a lot of spins, there was a double row of tires up against the Armco barrier. That allowed a bit of a cushion before metal hit metal. The right front corner hit first as I was sliding backward, and that slammed the entire right side into the tire wall.

As the photos show, the left side still looks good, but the right side lost a lot of pieces. Tires, brakes, part of the front spoiler, and even a door handle got left on the track. 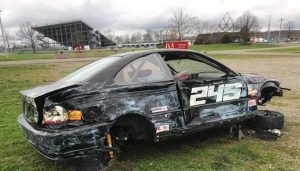 I bounced around inside the car a bit, but the 5-point harness, along with the Hans device and race seat (which was displaced), kept me from any serious injury. I could hear the helmet tapping the roll cage as the Hans straps held my head on straight. The seat belts left their marks on my body, and my right arm suffered a good size bruise when it was restrained by the netting that did its job.

The crash crew was there in less than a minute, and I had my arm out the window so that they knew that I was OK. I was certainly more embarrassed than hurt especially considering that this was practice. Nobody crashes in practice, a race, maybe but not while practicing. The fire extinguishers were at the ready but not needed, and the ambulance pulled up to offer me a ride a minute later. There were questions to answer (like: where are you?) and forms to fill out.

I have certainly crashed before; it happens when you race, but never bad enough to total a car. The front frame was pushed left when the right front tire hit the wall, but the engine and drivetrain were spared any damage. That became important when the other car suffered an engine failure due to a driver finding 3rd gear when he meant to go to 5th at speed. The engine swap was done on Sat night in less than 4 hrs, so the other drivers didn't lose their racing seat time. That engine ran to the end on Sunday, proving I would've had a great race if I hadn't crashed.

I was thankful that I didn't break any bones, and I still knew what day it was when I was asked at the Care Center, but I sure felt like a jerk. The track insurance saved my bank account, and Matt was really good about the damage I did to his car. As he said, "you don't really know where the limit is until you exceed it" sometimes it hurts, sometimes it doesn't. This time it hurt, but I definitely know where the limit is, in turn, ten on a damp track.