OK, so we’re now back to writing about “moving car events” (the job responsibility of your scribe who is VP Activities).  The weekend of May 6-7th saw the Zone 1 Concours and Rally come to NER-land (see article elsewhere in this issue).  As an autocrosser, DE’er, tech sessionist and social attendee but never a concourser or rallyer I was poorly trained to be the local event chair for these activities.  (And why Concours falls under “moving car events” is a puzzle.)  But I learned quite a bit about how these things work and I met many nice folks who don’t run in the same PCA circles as me.  The gimmick rally was fun – driving through some pretty Boston suburbs looking for signs that would answer questions.  Charlie and Martha Dow did a great job setting it up.  I can imagine Rosemary (former LL) and me doing one in the future.  On the other hand, while I enjoyed looking at the cars prepared for the Concours, I don’t see myself entering one in the future.

But I did get to the track – briefly – in April.  Our winter project of installing a larger engine in the BMW E30 endurance racer took a little longer than hoped.  The trickiest part flowed from the decision to remove all the stock wiring.  The new engine uses a programmable ECU and it took more than a couple of weekends before it recognized all the sensors and sent out all the appropriate signals.  We missed our first race at Watkins Glen.  When we finally got it to run and sent it to the dyno for tuning, it had fuel starvation issues.  The gas tank is saddle shaped with the pickup at the bottom of one side but the fuel return line going into the other side.  Apparently on the track it sloshes around enough to keep both sides filled but on the dyno the pickup side was being drained faster than it was replenished.  Weird.  But that issue was solved, the car did its dyno thing and we were off to Palmer for its maiden run.  Chip took it out first (fortunately as I’m not sure I would have been so astute) and immediately noticed that we lost oil pressure on left hand turns (and with a counter clock-wise track that’s most of them).  We tried adding oil but to no avail – going straight or turning right the oil pressure was 60lb+ but as soon as you turned the wheel to the left it would drop as low 15.  No good.  Back to the shop it went and removing the oil pan revealed that the windage tray/baffles had not been installed.  The red-faced engine builder shipped us the needed parts and we went to a Palmer lapping day for a re-test.  All good.

So we were set for our first race at New Jersey Motorsports Park but disaster befell:  Chip hurt his back.  We were already worried about having only 4 drivers for two 9 hour races so we recruited two more drivers:  NER/NCR buddy Damon Josz and Kristin Larson’s brother Scott Townsend.  After the miserable slog through NY and NJ (why are there so many confusing routes to get past NYC?) we got to Millville in time to unload the trailer and get dinner at Longhorn Steakhouse (TripAdvisor rated #2 restaurant in Millville! – they boast of “Craft on Draft” and list these four beers:  Miller Light, Bud Lite, Blue Moon and Sam’s Seasonal.  The Lunch Lady would sue).  Friday morning we went through tech and let Damon and Scott have a few laps as they had not been at this track.  Friday afternoon each driver was to run 5 laps which would then be used to place us in a class.  The American Endurance Racing series format puts cars in 5 classes based on similar lap times and then you compete against the other cars in your class for a 9 hour race on each of Saturday and Sunday.  They claim that they are able to detect and correct for those who sand-bag in qualifying but that did not seem to be the case... Things were going OK until Scott reported that 1st and 2nd gear had gone missing.  While we checked shift linkages and made calls it was also noted that the front brake pads were way too thin (Team Jamaican Bakin’ was better organized when our name was still named Team Jamaican Bacon).  With new brake pads installed but no transmission solution, we concluded that the missing gears were not needed in a race so why not press on?  OK, here’s a reason:  the car doesn’t idle well and stalls easily so getting off the grid quickly in 3rd gear was near impossible.  What, me worry?

We were placed in Class 3 (there are five classes) which included 19 out of the total of 54 racers.  The fastest lap times for each car (during the actual races – never mind what the sand-baggers ran in practice) ranged from a best of 1:28 down to about 1:45 for the slowest cars.  The fast cars included a Nissan GTR, a very fancy Mustang and a brand new BMW 2-Series factory race car (~$90,000 – similar in concept to the Miata Cup Cars) that even had air-jacks (and were total jerks – they were in the pit box next to us).  Our best lap of 1:37 put us in the middle of our class.

I drove first and was holding back a bit to avoid the early race over-exuberance.  Bad strategy:  on lap 4 I got punted in the right rear and spun into the weeds.  I managed to rejoin the fray (remember, only 3rd gear and higher) and was advised by my teammates to see how it felt rather than coming in.  It felt fine so I continued for another one and a half hours without issue.  When I pitted to hand over to Scott the tires were checked and it was noted that there were about 8 inches of missing rim.  Ouch!  Lesson:  you get hit, come in and have a look! 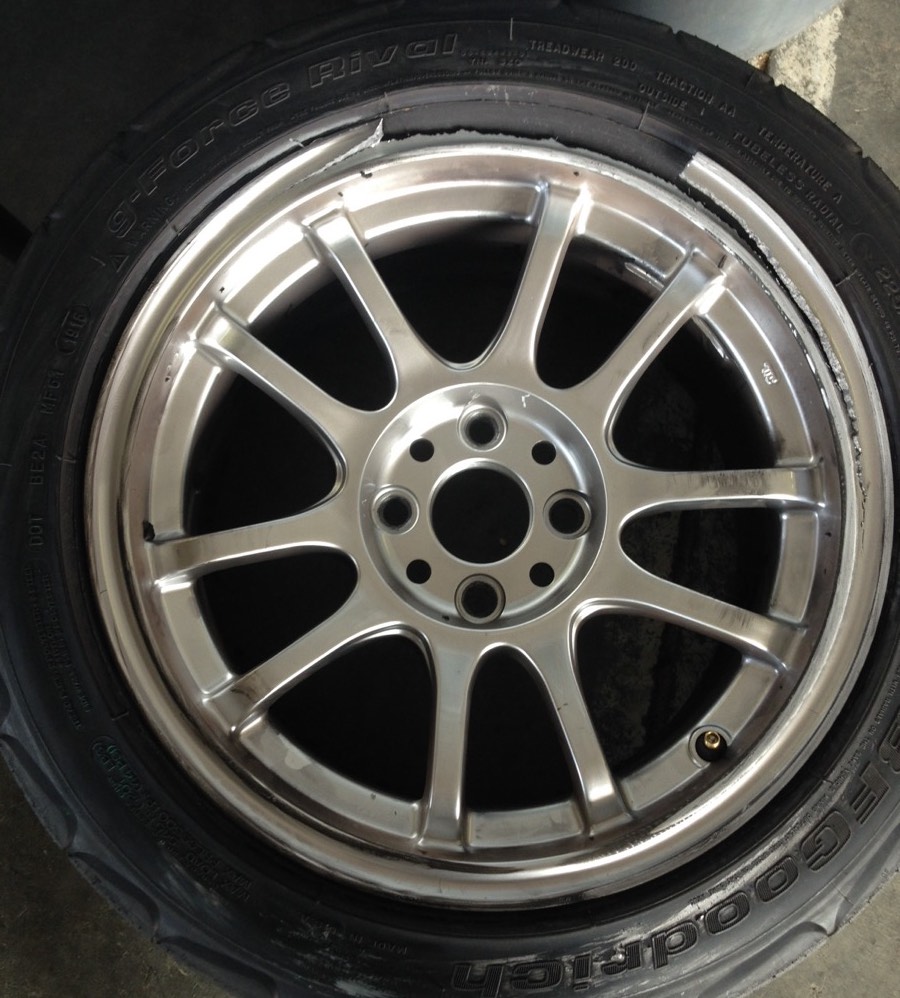 The car was running fine for the rest of the day except we needed to change tires (we had made a poor tire choice for an endurance race – the seconds gained by using stickier tires are way less than the minutes required to change tires) and the brakes were going at the end.  Then with 5 minutes to go Dave radioed that the car had died and he was being towed in.  Our worst fears were not realized when the addition of gasoline solved the problem.  Despite our issues we improved on our starting position and were 6th in our class.  Upon inspection the rear pads were totally gone and the brand new fronts were almost gone.  The left front tire was toast – expected for a nose heavy car on a clockwise track – but the right rear was worn on the inside.  Apparently the hit I took bent something but the car drove OK and there was nothing we could do.  The impeccably prepared Team Jamaican Bakin’ (yah, mon) was able to buy one more set of front brake pads from another E30 team (the Miata brake pads and tires lasted multiple weekends!) and we were back in business for Day 2.

Dave started on Sunday followed by Scott, me, Dennis and then Damon.  Again the car ran fine except for needing a tire stop.  The new brake pads (a different brand) both stopped and lasted better and we had no excitement until Damon’s last shift.  The car has a brake bias adjustor which apparently got nudged forward during the driver change so that it had way too much front brake bias.  So the first time Damon braked hard at the end of the front straight the fronts locked and he went farming.  He realized the problem, corrected it and ran very quickly till the end despite finishing on a totally corded left front tire.  We finished 8th in our class.

So while the BMW is somewhat faster than the Miata, we are still sorting things out.  With the new engine it has plenty of zip and the handling is pretty neutral if not great.  The main issue is the brakes which lock up too easily, don’t inspire confidence in close racing and don’t last.  It’s a little puzzling as the car is not much heavier than the Miata (which has great brakes) and has bigger rotors/pads.  We suspect that weight transfer may be limiting the stopping power and ducting may be needed to make them last longer.  So in addition to working on being better racers, we also need to learn car development.  Stay tuned.

Finally, if you go to NJMP (and it’s a nice, well run track with lots of runoff as needed by Bill and Damon), try:  Our Mom’s Kitchen Soul Food (get the crab cakes) and the Country Inn and Suites (breakfast available at 6am and they made bacon upon request!).

Guilty. Therefore the names remain. I would add the useful limericks and acronyms that were learned from Bill including ACORN (“All Clear On Right Now”). As I heard these outbursts several times, I quietly assumed these were liberal beliefs exclaimed in a random fashion. Alas I learned a backseat navigation technique and Bill’s prior military training. KISS and PPPPPP were already in my lexicon. Keep it simple stupid... brake bias adjustment/ placement.   And.... Prior Planning Prevents Piss Poor Performance.... brake pads for an endurance race?

Travel and dining with others provides new views and dialogue. And therefore we quickly adhered to the do not discuss politics, religion or dogs. Friday's test results in, and...the trans out? Hmmm. 3/4/5 being the only useful gears of any importance, the "no wanking noises" and "we’re here" made the decision clear. Run it. End of day track burgers provided by AER in the garage, the hunger abated. And a couple kegs dulled the senses. Yet Dennis and I had wanderlust and thirst. Bill, Scott, and Dave elected for A/C and hot showers.  Dropping the others off at the hotel, a beer store was located. And Our Mom's Kitchen next door. Hmmmm, soul food. With IPA in hand, what could be better? Fried chicken and (sic) crab cakes. Wit tater salad side. Missed the collard greens, but agricultural greens were waiting on Sunday. The color of the characters were rich. The pleasantries exchanged. And cash only. No seats, takeout only. Just as well. As we started to observe the actual condition of the local eatery, I tend to shy away from box store eateries, a placard was noted. This placard pronounced an inspection had occurred. When was not clear. Why was.  The proclamation by a local official, presumed blind and handed a paper bag of single dollar bills, announced that said takeout restaurant was, is, could be, maybe, at this time, that was then and this is now..."conditionally satisfactory." As not to offend the 3 rather large women, and the minor baseball league/rap ensemble and tattoo artists collective gathered out front, we elected to continue our wait. Momma provided. With a bit of mental math, and no receipt, we paid the bill. Our safe departure and arrival back at Country Inn (review to follow) 3.75 stars, we enjoyed a veranda on a hot summer night with excellent soul food and real beer. And a hotel cookie to finish. The start of Saturday racing, the transmission was declared "conditionally satisfactory" also. Both the trans and Mommas did not disappoint. Side note. The Buffalo Wild Wing box store the next night failed miserably.  However, Popeyes Chicken on Sunday had box store redemption.  None compared to Mommas soul food. And driving a race car into the trailer after 18 hours of wheel to wheel racing? More than "conditionally satisfactory" we checked the box, excellent. 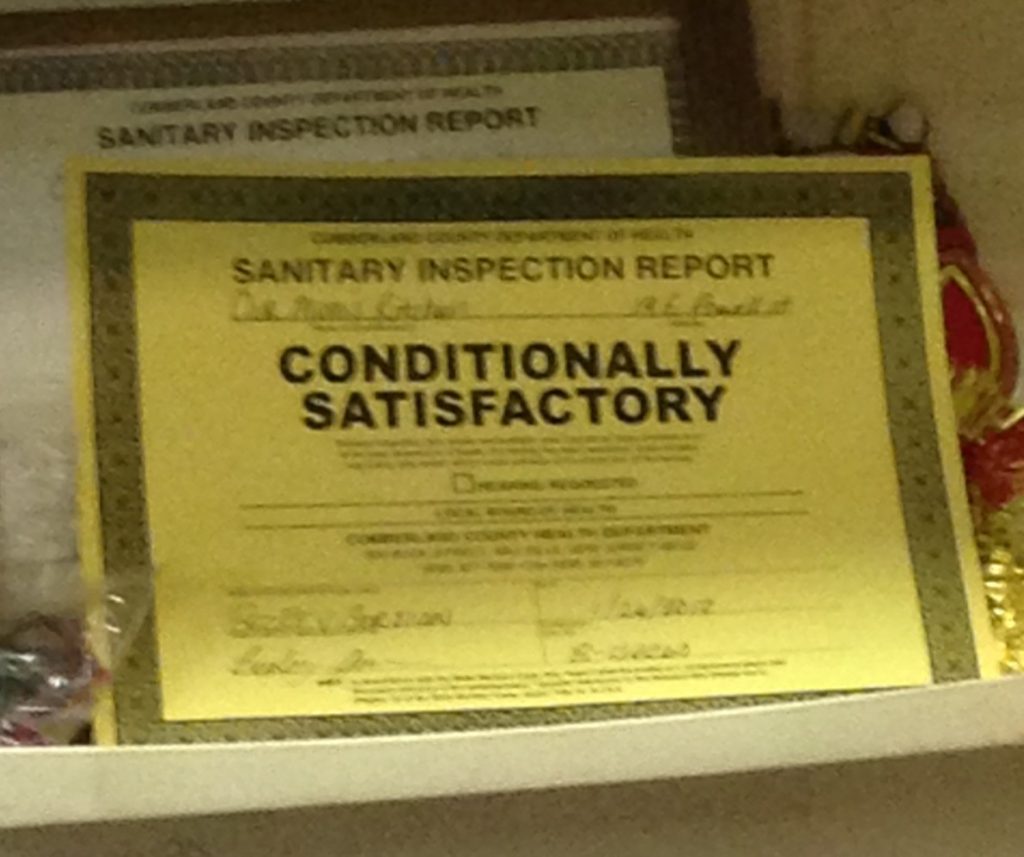