The Tortoise and the Hare

Do you remember the fable of the tortoise and the hare where the hare mocks the tortoise who challenges him to a race that the tortoise ultimately wins when the hare falls asleep when he takes a break!

This fable is very relevant to Sim racing. As a novice, most of us, including me, find it very hard to slow down in corners, and we tend to be overly anxious to pass slower drivers in spots where there is a high risk of messing up. What we haven’t realized is that a simple mistake like missing an apex can have a relatively huge cost. Spinning costs a lot more, and just one spin can set you more back than you can possibly recover. Hitting a wall and having to pit for repairs typically regulates you to being lapped at least once.

Grasping that you become faster by going slower is counterintuitive, and even when you understand that it is the case, It is insanely hard to do when someone is on your rear bumper, or you have just been given the green flag or light at the start. It took me two years of sim racing to do it.

Another thing that fascinates me is the differences in driving styles, brake points, and lines even pro-level drivers exhibit. What they do share is incredible consistency. They can hit exactly the same line plus throttle and brake application lap after lap. The lesson for me is that it doesn’t work to try to emulate your hero’s line, brake, and application inputs. What you need to do is figure out what works best for you and your current skill level and stick with it.

The Difference and Similarities Between Reality and Simulation in Racing

A common question regards how realistic Sim racing is. The short answer is that in some aspects, it isn’t and never will be, and in others, it is amazingly realistic.

Starting with where it is different, the sensory inputs that you use are something you have to learn. In a real car, you primarily use forces to tell you what is going on. You can feel your car rotate when you lose traction, your pedal pulses when ABS kicks in, and so on. In a simulator, it is impossible to replicate the forces that you experience in a real car. Not even a motion rig can come anywhere close. Brake and turning forces in a real race car can exceed one G. To replicate one G, a motion rig would have to be able to tilt you 90 degrees, and for more Gs than that, you would need to put the rig in a centrifuge. Even you did that, you can’t replicate the force transitions without having the simulator perform the exact same motions as the race car, which would require a track-sized simulator!

A motion rig does, however, help by adding physical forces to your body that can be extremely useful in spite of being unrealistic. I find exaggerated nose-diving helps me modulate my braking, especially when trail braking. Because my motion rig has a yaw actuator, I can feel a loss of rear traction in my butt.

So how do sim racers know what the car is doing? Force feedback steering wheels and pedals can replicate the motions and forces of the real race car.

Moving to the similarities, hearing, and vision can be replicated to the extent where they are totally immersive. A single monitor is too restrictive, but triple monitors or a Virtual Reality (VR) headset can be fully immersive. Auditory inputs benefit from being unrealistic. Tire noise is the most important, and it helps to dial down engine noise to make it easier to hear subtle changes.

To enhance realism, sim racing software takes great care to replicate the tracks as accurately as possible. The track and its surrounding are laser scanned and also videoed, so they look exactly the same. The physical properties of the race track are also replicated accurately down to traction, patches, grooves, and bumps.

I have driven Lime Rock Park both in a real race car and in the simulator, and I can testify that the track feels exactly the same in the two modalities.

The last area I will cover is the interaction between cars—turbulence, wind, and drafting work exactly the same. The one difference that can’t be replicated exactly is contact. Because of network delays, the simulation software uses a predictive algorithm to guess where cars will be relative to one another in spite of the delays, which usually are in the order of 9 to 10 milliseconds. What the software can’t predict is what the driver is going to do, so on occasion, the simulator will flag a car contact that actually didn’t happen. This is called a netcode in sim racing speak. Netcodes can be identified after the fact by looking at logs taken by the central server that runs the race.

I almost forgot pit crew simulation. The sim racing services and third parties provide simulated pit crews both for fueling and repairs but also for crew chief spotting for the racer plus lap and sector timing announcements. A particularly useful simulation is fuel calculations.

The final difference is in driver attitude. A crash in real life can cost you life, limb and serious damage to your wallet . A crash in the simulator has no financial cost, no risk to your and your co-racer’s health and at most causes a relatively brief pit stop in your race. This has a real effect on race attitude in sim racing drivers towards driving at 10/10ths or even 11/10ths. It makes races unfold differently. League races tend to have fewer incidents and crashes because the league organizers discourage aggressive racing; but in some uncontrolled sim racing environments there are an inordinate number of incidents and crashes.

To give you a feel for much of I have written here, including the tortoise and hare section, you can watch this broadcast video from a recent race in the PCA National league. In that race, I was able to successfully be the tortoise!

At the very last Autocross of the season on October 3rd, it was pretty cool, in the 50s. In spite of the cool temperatures, I did mount the Toyo race tires on the Caterham. Not surprisingly, I had wheel spin every time I put down the throttle. I did manage to avoid any spins, but in the afternoon, I was going through the sweeper from the runway to the main runway pushing the car hard when I heard a loud bang from the rear, followed by a lot of ugly sounding clanking. I was able to coast to a position where I wouldn’t interfere  with the course, and only Lev did a slowdown, mainly to hear whether I was OK. When I came to a stop, I tried to see if the car would move under its own power. No go, just the clanking noise. When the round was over the course workers around me helped push the car towards the pits, and Rob MxAlpine came out with his truck and a tow strap to get me the last part of the way.

When I jacked the rear up it became very clear what had happened: the universal joint on the left half shaft at the differential end had shredded itself—lots of bent sheet metal. Ollie was extremely helpful by allowing me to load my car into his trailer and take it to my home while I led the way in his Boxster. 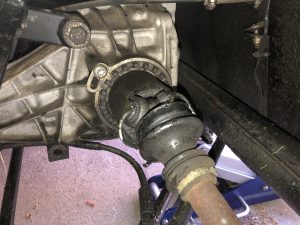 The next day I did some more investigating but was limited by my inability to find a 41 mm socket locally to remove the hub nut. Fortunately, I have all winter to get the car back into shape. I have ordered two half shafts, which only can be sourced from Caterham, plus two hub nuts. I will also have to send the left front damper back to Spax in the UK for a warranty repair, so the poor Caterham will spend the winter on jack stands in the garage.

I have subscribed for a couple of years to Ross Bentley’s Speed Secrets emails and really enjoyed them. Several times I have replied to them, and he has always responded, which is unusual. For quite a while, I have kept suggesting that he set up a training service for sim racing, and a few weeks ago, he asked me to beta test exactly that. He was also looking for a few bodies to help him run the service, and I immediately stuck up my hand and yelled, “Me! Me!”. He took me up on the offer, and I am managing and moderating the Discord server. There are a couple of other team members that fill other roles, and it has been and looks to be a fun thing to do. Take a look at https://simraceracademy.com/

Ross is also really great at responding to musings. One I haven’t shared with him, but will very soon is about how people learn. Here it is:

Learning to drive a race car is like any other learning process. You start by having a goal, like learning to threshold braking and transitioning to trail braking. So you know what you want to. It sounds simple, but braking performance depends on a huge number of factors, some of which are track temperature, road surface, tire wear, corner shape, camber, slope, car weight distribution, brake bias, and more! If you don’t take all factors into consideration, bad things happen!

You can take two approaches. 1. Emulate precisely what the better drivers do on every corner of the track. The trouble is that you have to find an expert to emulate every time you get to a new track or car and that what you emulate only works if the conditions are exactly the same as when the expert ran it. 2. Learn what the expert learned to be able to figure out how to brake optimally in every condition. I call 1. the what and 2. the why or how. To become really good, I believe you have to take approach 2. But there is a lot more to it. Even if you know the theory, it is a different matter to put it into practice, so you have to also learn that. Initially, and possibly for a long time, you will have to focus your mind on doing that, but that may distract you from performing other tasks well, so eventually, you will have to apply the task unconsciously, just like you automatically hit the brake pedal when a kid runs out in front of you. You don’t think, “kid on the road, I may hit it, need to stop the car, do that by moving my foot from the accelerator to the brake pedal, push really hard.” No, your foot is hard on the brake pedal without any thought process. You may feel that you are plateauing as you go through the process of moving the application of theory from conscious to automatic, but in reality, you are progressing all the time, getting ready to go into the next phase of learning.